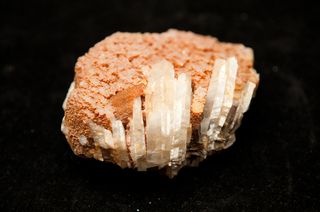 Lepidolite crystal is a source of lithium, rubidium and cesium.
(Image: © farbled | Shutterstock)

Rubidium is a silvery-white and very soft metal — and one of the most highly reactive elements on the periodic table. Rubidium has a density about one and a half times that of water and is solid at room temperature, although the metal will melt if it's just a bit warmer, according to Chemicool.

Like the other alkali metals (lithium, sodium, potassium, cesium and francium), rubidium reacts violently with water, oxidizes when reacting with oxygen, and ignites due to humidity in the air, so great care must be taken when working with the element. Scientists treat rubidium as a toxic element, according to Encyclopedia, although no known health effects of rubidium are known.

Rubidium was discovered by German chemists Gustav Robert Kirchhoff and Robert Wilhelm Bunsen in 1861 when they were observing the spectrum of the mineral lepidolite as it burned, according to Peter van der Krogt, a Dutch historian. The spectrum of rubidium showed off two dark red lines, and the scientists named the newly discovered alkali metal rubidium after the Latin word for “deep red.”

According to Chemicool, rubidium was extracted from the surrounding mineral by electrolysis. Approximately 330 lbs. (150 kilograms) of the lepidolite ore was needed in order to extract enough rubidium (about 1.5 percent of the mineral) in order to study its properties. The scientists found that rubidium was more electropositive (meaning that rubidium tended to form positive ions more readily, according to Encyclopedia) than potassium, another alkali metal and reacted violently with water releasing hydrogen.

According to New World Encyclopedia, there was very little need or use for rubidium until the 1920s when it was used more frequently in research, chemical reactions, and electronic applications.

A 2013 study by Adam Ghotbi, Andreas Kjær, and Philip Hasbak, Danish medical scientists, published in the Scandinavian Society of Clinical Physiology and Nuclear Medicine compares the use of rubidium-82, a radioactive isotope, as a tracer in use in PET technology with other methods and elemental tracers. According to the authors, rubidium-82 is becoming one of the most widely used elements in tracers in myocardial studies and procedures. With a half-life of 75 seconds, rubidium-82 is injected into the body and is used by the imaging system to detect damaged tissue and heart disease and, according to the authors, “yields excellent image quality.”

A similar study published in 2016 by Jennifer Renaud et al., a group of Canadian medical researchers, in the Journal of Nuclear Medicine. The study took place over a one-year period at three imaging centers with over 3,000 patients and was testing the quality of imaging using rubidium-82. The authors concluded that the use of rubidium-82 in PET scans was “accurate and precise, with consistent performance between different units and imaging centers.”

Using rubidium-82 for medical purposes dates back to 1954, according to a 2015 study by Jean-François Chatal, et al., a group of French medical researchers, published in Frontiers in Medicine in the Nuclear Medicine subsection. The FDA approval to use rubidium-82 in myocardial treatments came in 1989. The authors summarize the pros and cons of rubidium-82 which include low radiation exposure and a with high quality images as the pros and cost and a limited number of available PET systems being the cons. Even with the cons, the use of rubidium-82 is ideal in myocardial studies.