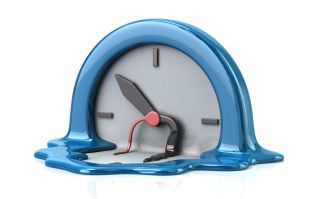 Can something be a solid and a liquid at the same time? Certain elements can, new simulations show.
(Image: © iStock/Getty Images Plus)

A new kind of matter can be both solid and liquid at once.

In this chain-melted state, molten and solid layers intertwine at the atomic level. Recently, using computer simulations, researchers coaxed virtual potassium into a chain-melted state by exposing the metal to conditions of extreme temperature and pressure, the scientists reported in a new study.

What's more, this dual state persisted even through dramatic changes in the experiments' conditions within the simulation. This evidence also showed that the chain-melted state is a stable type of matter and not merely a transition between solid and liquid. [The 18 Biggest Unsolved Mysteries in Physics]

These experiments were conducted at the atomic level in a virtual environment, but what might it be like to hold an object in this peculiar state?

"It would look and feel like a solid, so you could pick it up, then there's a liquid part in it that could leak out," study co-author Andreas Hermann, a reader in computational physics with the University of Edinburgh's School of Physics and Astronomy in Scotland, told Live Science.

"But once the liquid gets lost from the material, some of the solid part would melt to replenish it," Hermann said.

The researchers had already demonstrated in a prior study that potassium, a highly reactive metal, was a little weird. They showed that under high pressure, potassium forms an unusual crystal structure of two different, interwoven lattices, "going from a very simple atomic arrangement to something very complicated," Hermann said.

For the new study, the scientists ran simulations that subjected potassium to high temperatures in addition to high pressure. Incorporating machine learning into the simulations greatly increased the number of atoms — 20,000 at once in this case — that the study authors could test.

In the new simulations, when things heated up, potassium did something very strange. After its atoms formed an interlocked lattice structure, the atoms in one lattice were strongly connected, maintaining a solid state. But the signal from the other lattice vanished, indicating disorder in the atoms, the study authors noted.

In other words, these atoms became liquid while their immediate atomic neighbors remained solid, creating a state that is neither truly solid nor liquid, but a mixture of both, "interconnected on the atomic level," Hermann said.

Once the potassium samples reached this dual state, they lingered as part-liquid and part-solid even after the heat was turned up hundreds of degrees, according to Hermann.

Other studies have shown that potassium isn't the only element that develops two intertwined lattices of atoms under intense pressure, and these elements — "neighbors of potassium and elsewhere on the periodic table" — may also be capable of attaining a part-liquid and part-solid state, Hermann said.

And the machine learning system that the study authors developed to examine potassium could also be used with other substances, to decode how extreme conditions affect them at the atomic level.

"This is the proof of principle: a computationally cheap technique that can describe materials across a wide range of pressures and temperatures, including some very exotic states like the one we wrote this paper about," Hermann said. "That's our aim, to move on to other materials where we can answer different materials-science related questions."

The findings will be published online in a forthcoming issue of the journal Proceedings of the National Academies of Science.