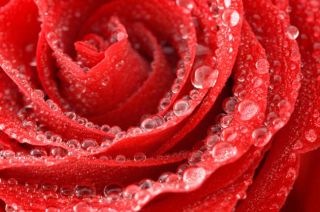 The dew point is the temperature at which air is saturated with water vapor, which is the gaseous state of water.

When air has reached the dew-point temperature at a particular pressure, the water vapor in the air is in equilibrium with liquid water, meaning water vapor is condensing at the same rate at which liquid water is evaporating.

Below the dew point, liquid water will begin to condense on solid surfaces (such as blades of grass) or around solid particles in the atmosphere (such as dust or salt), forming clouds or fog.

The relative humidity is 100 percent when the dew point and the temperature are the same. If the temperature drops any further, condensation will result, and liquid water will begin to form.

Most people are comfortable with a dew-point temperature of 60 degrees Fahrenheit (16 degrees Celsius) or lower. At a higher dew point of, for example, 70 F (21 C), most people feel hot or "sticky" because the amount of water vapor in the air slows the evaporation of perspiration and keeps the body from cooling.