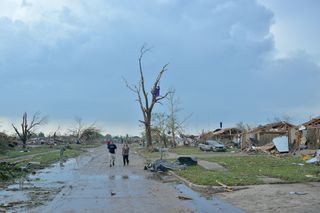 This past Monday, the Hurricane Sandy Rebuilding Task Forcereleased a thorough report that outlines dozens of recommendations to increase resiliency to extreme-weather events as the Sandy-affected region rebuilds. Secretary Shaun Donovan, head of the U.S. Department of Housing and Urban Development (HUD), wrote in the report's introductory letter that: "it is important not just to rebuild but to better prepare the region for the existing and future threats exacerbated by climate change."

To those of us working on climate preparedness, Secretary Donovan's letter is music to our collective ears. As a nation, the climate impacts we are already experiencing are projected to get worse in the future — including stronger hurricanes, more flooding, longer droughts, stronger wildfires, more extreme heat days and more severe storms.

The Federal Emergency Management Agency (FEMA) is taking the lead on several important recommendations in the report, especially to reduce flooding risks both in the Sandy-affected region and nationally. However, the Task Force missed one recommendation that FEMA needs to hear — it is time for FEMA to ensure that states consider climate-change risks in hazard planning.

"Disaster survivors currently have access to post-disaster Hazard Mitigation Grant Funds in coordination with their state and local hazard mitigation plans to assist in taking protective actions against future events."

So ... what does that mean, exactly? It means that FEMA will give money to states to reduce risks and damage from disasters, as long as projects are consistent with the state's FEMA-approved "hazard mitigation plan." These hazards plans ensure that the state understands its risks from natural disasters and has mapped-out strategies to protect public safety, health, and property. Unfortunately, FEMA does not require states to consider climate change in these plans, even though climate projections indicate increasing levels of risk that may lead to different preparedness strategies.

The Hazard Mitigation Grant Program (HMGP) is applicable nationally, not just in Sandy-affected regions, and requires states to have a FEMA-approved hazard plan to be eligible for grants. In addition to HMGP, there are several other FEMA grant programs to support disaster preparedness that also require a FEMA-approved hazard mitigation plan, including the Flood Mitigation Assistance and Pre-Disaster Mitigation grants. From 1989 to 2012, FEMA has granted over $8.5 billion in hazard mitigation assistance to states (check out the appendix of NRDC's petition to FEMA on this issue for state-by-state FEMA grant numbers).

Not only does FEMA allow states to ignore climate change in their hazard plans, but FEMA also provides no guidance or tools to help states address climate risks in their hazard plans. As a consequence, many disaster plans inadequately consider or completely omit climate risks, which means that states are not maximizing the effectiveness of FEMA preparedness grants (a.k.a. your taxpayer dollars). To help illustrate, here are a few examples of poor climate-risk planning:

New Jersey: New Jersey's current hazard mitigation plan simply mentions climate change in a disclaimer that says: "Technical information on climate change issues are still being reviewed and are not included in this April 2012 NJ Hazard Plan update." Considering recent statements by Governor Christie, hopefully this technical climate information will be able to find its way into the next plan.

Texas: The most recent Texas hazard plan does not address climate change projections for extreme heat, hurricanes and storm surge, drought, wildfires or inland flooding. The cost of recent disasters in Texas is substantial: $21 billion for Hurricane Ike in 2008; $7.6 billion for the 2011 drought; and $47 million just in FEMA relief funds for the 2011 wildfires. Considering those costs, FEMA has an obligation to taxpayers to ensure that Texas is fully prepared for climate-related disasters to reduce future damages.

Iowa: Iowa released its draft 2013 hazard plan for public comment in mid-July. Since the previous plan made no mention of climate change, it was an improvement to see a handful of climate-change acknowledgments in the new draft. However, even though Iowa's agricultural economy is vulnerable to climate impacts, the plan still does not fully consider climate risks. The plan excludes any description of climate risks for flooding , extreme heat or the effect of warmer temperatures on new agricultural pests and diseases. [The Changing Climate For Flood Insurance]

Unfortunately, these states are not exceptions. Many more have inadequate hazard mitigation plans when it comes to climate risks. This poor planning leaves people and property more exposed to risk, and leads to more inefficient spending of taxpayer dollars. Last October, NRDC petitioned FEMA to provide guidance and to require states to consider climate change in hazard planning. Nearly 11 months later, we still haven't heard a response.

Since President Obama and the Hurricane Sandy Task Force are highly focused on climate change and future risks, I'm keeping my fingers crossed that federal grants are being spent on climate-smart projects in the Sandy rebuilding effort. Of course, for future disasters across the nation, we can't count on crossed fingers and wishful thinking to achieve climate resiliency. FEMA needs to require states to adequately address climate change in their hazard planning, and provide guidance to help states fully consider their risks.