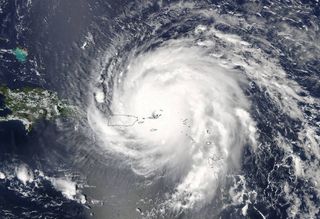 Hurricane Irma is continuing on its destructive path toward Florida. Hurricane Jose is gathering strength in the Atlantic. And Hurricane Katia is brewing in the Gulf of Mexico. Irma,  Jose, Katia? How did such energetic forces of nature end up with these names?

Hurricanes are assigned names for the purpose of public safety, Clare Nullis, a spokesperson for the World Meteorological Organization (WMO), told Live Science in an email.It's easier for the media to publicize a storm and increase interest in warnings when a storm has a name, according to the WMO.

Hurricane Irma got its name because it follows Harvey on a predetermined list established by the WMO for hurricanes (below) that occur in the Caribbean Sea, Gulf of Mexico and the North Atlantic Ocean. [Hurricane Irma Photos: Images of a Monster Storm]

Six years' worth of names have already been planned out, including 21 names per year. But although the names more or less follow the alphabet, don't hold your breath for Hurricanes Quinn or Umberto — there aren't any names on the list that begin with Q, U, X, Y or Z because there aren't enough names that begin with these letters, according to Nullis.

In the unlikely case that there are more hurricanes than predetermined names in a year, hurricanes in this region of the world are named after Greek letters: Alpha, Beta, Gamma and so on, according to the WMO. Storms have been named Alpha—or Alfa—a few times: in 1972, 1973, and again in 2005, although the latter storm, which blasted Haiti and the Dominican Republic with torrential rain was overshadowed by devastating effects of Hurricane Wilma.

Hurricane names are retired upon request of the country's representative at annual meetings of a WMO committee called the Regional Association IV Hurricane Committee. This is done when a storm has been so damaging that a future use of the name is considered insensitive, according to Nullis. Katrina, Sandy, and Ike—exceptionally disastrous Atlantic hurricanes that affected the U.S.—have all been cut from the list (below).

But the process of assigning names to Atlantic hurricanes wasn't always so neat.

Beginning in 1950, storms in this region were named after the Joint Army/Navy phonetic alphabet — Able, Baker, Charlie, Dog — until three years later, when the convention changed and female names were used instead, according to Patrick Fitzpatrick, a professor of meteorology at Mississippi State University and author of the book "Hurricanes: A Reference Handbook" (ABC-CLIO, Inc., 2006). In the interest of gender equality, male names were added to the mix in 1979, according to Nullis.

Officially, storms aren't named after specific people, according to the WMO, but this doesn't prevent people from being upset about sharing their name with a massive storm, Nullis said.

She recalled a complaint from last year by a man named Matthew who was unhappy about sharing his name with the 2016 storm that wreaked so much havoc in Haiti. In another instance, someone said the names aren't sufficiently "tough." (Matthews everywhere may be heartened to know that out of respect for the fatalities and extensive damages caused by the 2016 hurricane of the same name, the name Matthew was recently retired, making way for Martin, according to the WMO session proceedings.)

Others have differing ideas about how hurricanes should be named, including some who suggest they should be named after science-fiction characters and others who offer up their own names, Nullis said.

Then, there are the more vindictive individuals who want to imprint their personal resentments on natural disasters.

"We had one lady asking us to name a hurricane after her ex-husband," Nullis said.

As for Irma, this is the first year the name has been used for a hurricane. Irma took the place of Irene, a name that was retired from rotation at the request of the United States in 2012. Whether Irma or Harvey, the moniker given to the recent hurricane that devastated southeastern Texas, will be retired is a decision that will be made by the Regional Association IV Hurricane Committee at the next meeting, to be held in France in 2018, according to the WMO.