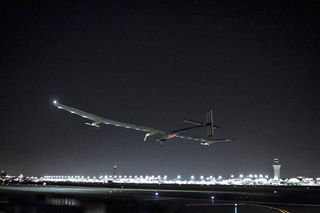 A solar-powered airplane that is attempting to complete a record-breaking journey across the United States will make a short detour in Ohio tomorrow (June 14) to avoid bad weather, according to flight officials.

The plane, dubbed Solar Impulse, completed the third leg of its coast-to-coast trip on June 4, after flying from Dallas to St. Louis. Tomorrow, Swiss pilot and Solar Impulse co-founder André Borschberg will fly the aircraft from St. Louis to Cincinnati, rather than the previously planned route that would have taken the plane directly to Washington, D.C.

"The flight will be split in two because strong cross and head winds would slow the aircraft and make it impossible for the pilot to reach the nation's capital in one go in less than 24 hours which is the limit set for the pilot in the cramped single-seater cockpit," company officials said in a statement.

Solar Impulse is scheduled to take off from Lambert-St. Louis International Airport tomorrow at 5 a.m. EDT (4 a.m. local time in Missouri). The aircraft is expected to reach a cruising altitude of 10,000 feet (3,050 meters) as it flies over Kentucky, heading north toward Ohio.

The plane is expected to land at Cincinnati Municipal Lunken Airport around 9 p.m. EDT, after approximately 16 hours in the air. According to company officials, flight directors will continue to monitor weather conditions, and may decide to postpone the trip or alter the route, if needed.

Solar Impulse is the first aircraft capable of flying day and night without using a drop of fuel. The plane's coast-to-coast journey is part of an initiative called "Clean Generation," which aims to promote clean technologies and sustainable energy solutions.

Once the plane touches down in the nation's capital, the Solar Impulse crew will take part in a variety of outreach programs, including public visits and a roundtable meeting with U.S. Secretary of Energy Ernest Moniz.

Solar Impulse began its unprecedented cross-country expedition at Moffett Airfield near San Francisco on May 3. In early July, the plane will complete the final leg of the journey, traveling from Washington, D.C., to New York City.

Each leg of Solar Impulse's flight is being streamed live online, and features up-to-date information on the aircraft's position, altitude and speed. The live feed also includes views inside the plane's cockpit, and from Solar Impulse's mission control center in Switzerland.

Solar Impulse is powered entirely by solar panels and onboard batteries. The plane generates about the same amount of power as a small scooter, company officials have said.