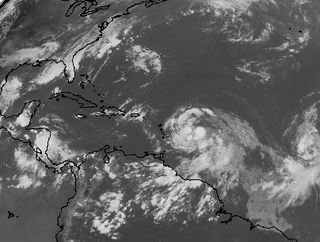 The ninth named storm of the 2012 Atlantic hurricane season has churned to life over ocean waters east of Puerto Rico; the National Hurricane Center announced the birth of Tropical Storm Isaac at 5 p.m. ET today (Aug. 21).

Air Force hurricane-hunting aircraft investigating a patch of rough weather known as Tropical Depression 9 found that the storm's swirling winds had ramped up to 40 mph (65 kph) this afternoon, pushing it over the threshold required for tropical storm status.

A storm is named only once it becomes a tropical storm — defined as an organized, rotating storm with maximum sustained winds of at least 39 mph (63 kph). A tropical storm becomes a hurricane once its top winds hit at least 74 mph (119 kph).

Isaac is the fifth named storm to form in the Atlantic basin since early August. The sudden glut of storms is a stark change after a long spell of quiet weather. From late June and for the entire month of July, no named storms appeared.

The recent uptick in storm activity is keeping pace with an updated seasonal forecast from the National Hurricane Center in Miami, issued Aug. 9, which increased the number of storms expected during the 2012 Atlantic hurricane season.

The initial seasonal forecast called for nine to 15 named storms; the updated outlook projects that 12 to 17 named storms, including the storms that have already occurred, will appear this year.

Isaac is located approximately 500 miles (810 km) east of the island of Guadaloupe, and is heading west at about 17 mph 28 (kph). The storm is expected to continue along this path for the next two days, according to the latest update from the NHC.