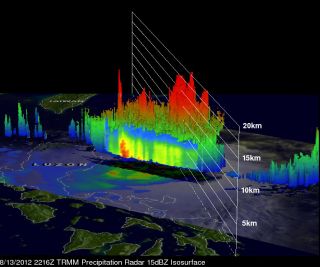 NASA's TRMM satellite flew over Kai-tak on Aug. 13, 2012 at 4:16 p.m. EDT and TRMM's Precipitation Radar data were used in a 3-D image to show the vertical scale of the numerous powerful storms near Kai-tak's center. Some convective storms were reaching heights of about 9 miles (15 km).
(Image: © SSAI/NASA, Hal Pierce)

Parts of the Philippines, including the city of Manila, have already seen torrential rains and massive floods from a stream of tropical storms and typhoons that have plagued Southeast Asia in recent weeks. Tropical Storm Kai-tak didn't help matters: A NASA satellite shows that it is also dumping plenty of rain.

The Tropical Rainfall Measuring Mission (TRMM) satellite flew over Kai-tak on Aug. 13 at 4:16 p.m. EDT (2216 UTC). Data from its instruments showed that the most intense rainfall of over 4 inches (100 millimeters) per hour was east of the Philippines over the open waters of the Pacific Ocean. Some light to moderate rainfall from Kai-tak was shown falling on the island of Luzon.

TRMM data was also used to create a 3D image that shows how high Kai-tak's storms reach in the atmosphere, a sign of their strength. The most powerful storms were reaching heights of about 9 miles (15 kilometers).

Kai-tak (locally known as Helen) prompted tropical storm warnings to be issued across the island of Luzon, the largest island in the Philippines. The storm has now passed over the Philippines and into the South China Sea.

The latest update from the Joint Typhoon Warning Center (run by the U.S. Navy and Air Force), put Kai-tak's maximum sustained wind speeds at 64 mph (102 kph), which make it a strong tropical storm. It is currently about 320 nautical miles (590 kilometers) east-southeast of Hong Kong, and is expected to make landfall in the Hong Kong area in about a day.

Kai-tak will be the fourth tropical storm to hit China this month. Typhoons Haikui, Saola and Damrey hit earlier in August.