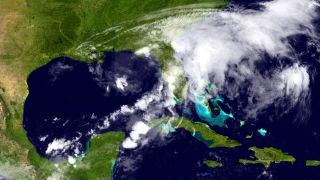 An unusually early spate of tropical storms has been keeping forecasters busy this year, and now Tropical Storm Debby, the fourth named storm of the Atlantic hurricane season, has set a record — this season marks the first time in more than 150 years that so many storms have showed up so early.

"This is first time we've had four tropical storms develop in the Atlantic basin before July 1," said Dennis Feltgen, a meteorologist and spokesman for the National Hurricane Center in Miami, Fla.

U.S. records for tropical storms and hurricanes stretch back to 1851, Feltgen told OurAmazingPlanet. And although Tropical Storm Debby has broken the century-and-a-half-long record, there is certainly a chance that four storms may have formed this early in the past, yet escaped notice simply because forecasters didn't have the tools to see them.

"We figure that back in the day there could have been several storms per season that could have been missed," Feltgen said. "We didn't have satellites." Forecasters relied largely on ship reports and on firsthand observations when a storm hit land.

Tropical Storm Debby roared to life over the Gulf of Mexico and attained tropical storm status late in the afternoon on Saturday, June 23.

Storms are christened only once they reach tropical storm strength — meaning an organized, rotating storms with maximum wind speeds of at least 39 mph (63 kph).

Because tropical storms and hurricanes are fueled by warm ocean waters, the areas that have the ingredients required to feed a storm's fury are more limited earlier in the season, Feltgen said.

The area that is the most favored area of development is pretty narrow, he said, and typically limited to areas of the Caribbean, the Gulf of Mexico and warmer, southern regions of the Atlantic.

"In the grand scheme of the Atlantic basin that's a relatively small area," Feltgen said.

However, unusually warm waters didn't contribute to this year's early storms — they were generated when storm systems that formed over land moved out over the ocean, said Gerry Bell, the National Oceanic and Atmospheric Administration's lead seasonal hurricane forecaster.

"Unless the water is sufficiently warm you're not going to get a tropical storm, but warm water wasn't the main ingredient allowing these things to form," Bell told OurAmazingPlanet. He pointed to disturbances in the jet stream and storm fronts moving out over the water as the main culprits.

"There's nothing special about that, that's how storms typically form this time of year," Bell said.

During the peak of hurricane season, in August, September and October, patches of rough weather that originate in Africa spark the bulk of the storms, Bell said. In addition, tropical waters that have had time to warm up, along with favorable winds, allow more storms to form at that time of the year.

The unusual onslaught of named storms has not altered the outlook for the rest of the season, Bell said, which is forecast to be a near-normal one. Projections for the 2012 Atlantic hurricane season call for a total of nine to 15 named storms, with four to eight of those storms becoming hurricanes.

Tropical Storm Debby is lashing Florida with punishing rains, and is producing dangerous storm surges between 4 and 7 feet (1.2 and 2 meters) along the state's panhandle. The storm spawned 20 reported tornadoes yesterday (June 24), one of which killed a Florida woman in her home.

Debby has remained parked over the Gulf of Mexico, with much of the severe weather hitting to the east of the center of the storm.

Although the storm has weakened slightly, it is still packing winds of 45 mph (75 kph), and is expected to move only very slowly toward the northeast over the next two days, meaning there is little relief in sight for Florida and Georgia residents.