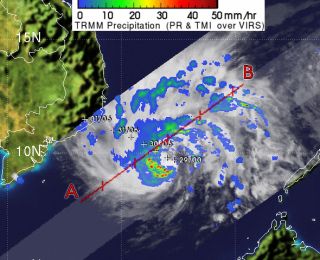 System 96W intensified overnight in the South China Sea and became Tropical Storm Pakhar during the morning hours of March 29.

NASA's Tropical Rainfall Measuring Mission (TRMM) satellite passed over Pakhar on the same day and saw that it was generating mostly light to moderate rainfall around the entire system, with areas of heavy rain in the southwestern and northeastern quadrants.

Light to moderate rainfall rates were between 0.78 to 1.57 inches (20 to 40 millimeters) per hour and heavy rain was falling at a rate of 2 inches (50 mm) per hour. The banding of thunderstorms has continued to consolidate and strengthen since March 28, which accounts for the cyclone's increase in strength, according to a NASA statement.

Pakhar is about 300 nautical miles east of Ho Chi Minh City, Vietnam. It is moving to the west-northwest at about 3 knots (3.4 mph/5.5 kph).