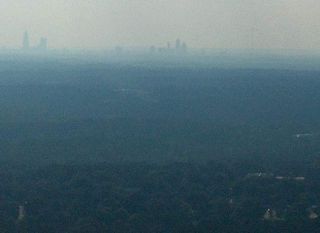 Researchers used a new mathematical model to simulate the random motion of pollutants — like exhaust particles, diesel fumes and chemical residues — as would be found in the real world, and they looked for coherent dispersal patterns.

"In previous studies, the existence of these patterns in fluid flows was only verified with idealized 'theoretical' flows,'" researcher Wenbo Tang, of Arizona State University in Tempe, said in a statement. "It was not known if such structures were robust enough to manifest in the environment."

But Tang and his colleagues found that patterns indeed emerged from the movement of particles carried by these wind flows, according to the American Institute of Physics, which recently published the research in its journal Physics of Fluids. The researchers said their formula might be used to map which regions of a city are most susceptible to high concentrations of pollutants, which, in turn, could help policymakers decide how to deal with particularly hazardous or vulnerable areas.