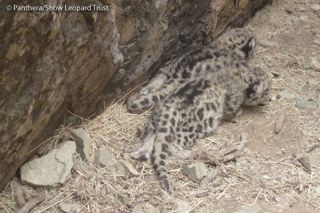 A narrow cleft in a rock wall served as these snow leopard cub's den. The conservation group Panthera released photos of the cubs on July 12, 2012.
(Image: © Panthera/Snow Leopard Trust)

The dens of two snow leopard mothers and their cubs have been located in Mongolia for the first time, with new, unprecedented video showing the mothers and their young inside the den, a conservation organization announced yesterday (July 12).

Snow leopard dens are difficult to find because of the animals' secretive, elusive nature and the difficult, mountainous terrain in which they live. Finding the dens is an important step in learning more about the reproductive behavior and the young of this endangered species.

"We have spent years trying to determine when and where snow leopards give birth, the size of their litters, and the chances a cub has of surviving into adulthood," said Tom McCarthy, executive director of the snow leopard program at Panthera, a wild cat conservation organization.

Most of what has been previously known about snow leopards and their young has been gleaned from animals in zoos, where litters typically consist of one to three cubs. How big wild litters are and how the young fair in the wild — where they are subject to predation, disease, poaching and capture for the illegal wildlife trade — was not known.

The dens were discovered in Mongolia's Tost Mountains, where locals refer to the creatures as "Asia's Mountain Ghost."

A team of scientists from Panthera and the Snow Leopard Trust entered the dens when the mothers were away hunting. They found that the first had two cubs and the second, one. All three cubs were weighed, measured and photographed and handled with extreme care, according to a Panthera release. Two were fixed with tiny microchip ID tags (about the size of a grain of rice) that were placed under their skin for future identification.

The use of these tags and observations from the team can help scientists learn how long the cubs stay in their den, when they begin to venture out with mom and how long and often mom leaves to go hunting.

A short video of the female and her cub bedded down in a partially man-made den was recorded from a safe distance by Orjan Johansson, Panthera's snow leopard field scientist and Ph.D. student, using a camera fixed to an extended pole. [Watch the video of the snow leopards.]

Over the ensuing days, the team monitored the mothers' locations to make sure they returned to their dens, which they did.

"Knowledge about the first days and weeks of life is vital to our understanding of how big cat populations work, and how likely it is for a newborn to reach adulthood and contribute to a healthy population. A valid conservation program requires such information, which this new development in snow leopard research provides," Howard Quigley, Panthera's (www.panthera.org) executive director of jaguar and cougar programs, said in the statement.

Only around 4,500 to 7.500 snow leopards are thought to remain in the wild. In recent years, pictures of snow leopards from camera traps have also been taken in other parts of the animal's range, including Bhutan, Siberia, Kashmir and Afghanistan.