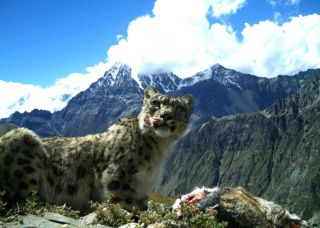 In the central Himalayas of Nepal, snow leopards depend on livestock for about 25 percent of their diet.
(Image: © Madhu Chetri)

The snow leopard is either a threatened animal or a threat, depending on whom you ask.

The endangered cats face a shrinking habitat and diminishing numbers of natural prey, meaning that conflicts between humans and snow leopards are on the rise. One of the biggest conundrums: The cats sometimes snatch domestic goats and cows, and in retaliation, they are killed by herders, whose way of life depends on livestock.

A new study published in the journal PLOS ONE today (Feb. 8) attempts to quantify the problem. In the central Himalayas of Nepal, about one-quarter of the snow leopard's diet is livestock, according to the research. The same was true for another rare predator in the region, the Himalayan wolf.

"This information is crucial in a place where livestock, wild prey and carnivores share the same landscape, and carnivores are considered as a threat," said study leader Madhu Chetri, an ecologist at Inland Norway University of Applied Sciences. "A clear understanding of carnivores' diets is essential for developing effective long-term conservation strategies." [Rare Photos: Snow Leopard Babies in Dens]

The researchers were able to identify prey DNA from 182 of the leopard scats and 57 of the wolf scats they collected. While snow leopards mostly preferred to hunt cliff-dwelling wild animals —primarily Himalayan blue sheep and Himalayan tahr — 27 percent of their diet was domestic livestock such as goat, horse and yak. Similarly, the diet of Himalayan wolves was 24 percent livestock, the researchers found.

Previous research has found that snow leopards have a fairly narrow dietary niche. (They tend to like goat-size ungulates.) An analysis of the carnivores'prey selection in the new study found that in regions where the snow leopards' preferred natural prey was unavailable, they mostly turned to comparable domestic animals. Wolves, on the other hand, are more opportunistic predators with more varied diets.

Biologist Tom McCarthy, executive director of conservation group Panthera's snow leopard program, said that previous studies have found similar, or sometimes even higher, rates of livestock predation in the region. But, he added, the new research highlights conservationists' ongoing concern about conflict between the cats and the typically poor herders who live in most of the snow leopard's range.

"One of the well-known conservation concerns is retribution killing of snow leopards for livestock losses," said McCarthy, who wasn't involved in the study.

Conservationists estimate that just 6,000 snow leopards remain in the wild. Humans kill up to 450 of the cats annually, according to a report released in October 2016 by the wildlife crime-tracking group Traffic. More than half of those cases are retribution killings.

"This is also why so much conservation effort is placed on finding ways to reduce livestock losses in the first place —predator-proof corrals, for instance —or to offset the losses through a variety of economic incentive schemes, and it is working," McCarthy told Live Science.

Chetri said future research will focus on estimating livestock mortality rates and identifying factors that might contribute to livestock loss. "This will bring some new insights in managing conflicts between leopards and wolfs and local communities," Chetri said.