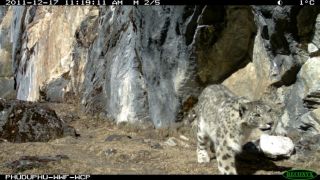 A snow leopard visits its relic site in Wangchuck Centennial Park, Bhutan. This is a spot where it repeatedly marks its territory.
(Image: © Royal Government of Bhutan (DoFPS) and WWF)

Amazing new video and still images of snow leopards and their prey were captured during the first-ever survey of snow leopard prey in Bhutan's newest national park.

The new footage includes snow leopards engaging in scent-marking, which marks a leopard's turf, and a sub-adult snow leopard. The pictures are valuable because these elegant and elusive creatures aren't easy to photograph: Last year, scientists captured the first images of snow leopards in Siberia, and a rare image of a mother and cub in the Afghanistan mountains.

Snow leopards have even been known to steal wildlife cameras.

The new survey in Bhutan also took pictures of other species, such as a healthy population of blue sheep, which is the main food source for snow leopards. These new images are the first pictorial-based evidence that snow leopards are thriving in Wangchuck Centennial Park, a vital snow leopard corridor between Jigme Dorji National Park in the West and Bumdeling Wildlife Sanctuary in the East. Field biologists from the Government of Bhutan and the conservation group WWF captured more than 10,000 images during the camera trap survey.

"The findings are phenomenal as these are the first snow leopard images recorded in Wangchuck Centennial Park," said WWF's Rinjan Shrestha, who led the survey team. "It suggests that the network of protected areas and corridors is helping to link local snow leopard populations, which will be invaluable to ensure long-term persistence of snow leopards in the region."

Snow leopards are elusive and endangered, with around 4,500 to 7,500 in the wild. Bhutan is the only country on Earth where the habitat of snow leopards and tigers intersect. It's unknown how many exist there, but it's critical to find out as threats are mounting — from retaliatory killing from herders, loss of habitat to farmers and poaching for their pelts.