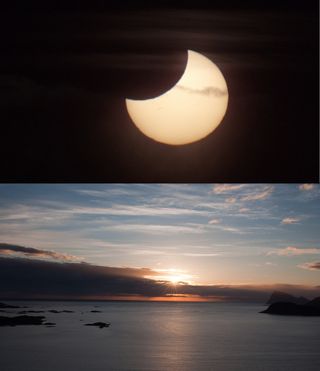 The last solar eclipse of 2011 will put on a show for some in the Southern Hemisphere on Friday (Nov. 25), but Americans shouldn't bother to look up from their Thanksgiving leftovers.

According to NASA, viewers in South Africa, Antarctica, Tasmania and most of New Zealand will see the partial eclipse at 06:20:17 Universal time (1:20 a.m. Eastern time). With a magnitude of 0.905, this is the largest partial eclipse of the year, hiding much of the sun.

The number of solar eclipses varies each year between two and five. In 2011, there were four solar eclipses. In 2012, astronomers predict just two. The next solar eclipse will be on May 20, 2012, and more Northern Hemisphere denizens will get a shot at seeing it: The eclipse will be viewable from eastern Asia to parts of the western United States.