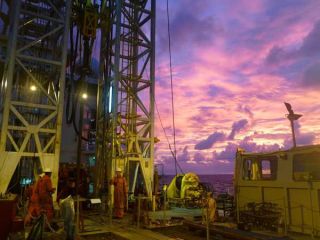 Sunrise over the Greatship Maya's enormous drill. Scientists used the hulking machine to retrieve ancient, fossilized coral from the bottom of the ocean.
(Image: © ECORD/IODP.)

A voyage to the outer edges of Australia's Great Barrier Reef has brought back pieces of an ancient, fossilized ancestor to the vast, living ecosystem.

This fossilized coral reef was alive about 20,000 years ago, during the height of the last glacial period, a time when Earth was around 9 degrees Fahrenheit (5 degrees Celsius) cooler than it is now, and the city of Chicago was buried beneath an ice sheet almost 2 miles (3 kilometers) thick.

By studying this ancient coral, scientists are hoping to put together the most accurate picture yet of how sea levels have changed over thousands of years, data that can help inform projections of how sea levels may change in the future.

Getting to the ancient coral, a sort of great-great-grandfather to the Great Barrier Reef, posed a challenge; it lies on and below the ocean floor. [See images from the expedition.]

The research vessel the Greatship Maya, equipped with a massive drill, and the scientists, equipped with ear plugs, spent two months boring 34 holes deep into the ancient coral reef at three key locations. The team retrieved over 730 feet (225 meters) of cylindrical coral samples.

Carol Cotterill, a staff scientist for the Integrated Ocean Drilling Program (IODP) and the European Consortium for Research Drilling (ECORD), the multi-country organizations behind the expedition, said one of the reasons the Great Barrier Reef was chosen is because it's not subject to the same kind of up-and-down tectonic jiggling that affects other spots around the globe. The region has stayed in virtually the same place over millennia, which means data taken from the area give an accurate picture of ocean levels over time.

"We don't have a separate signal to distract us, so we're fairly confident that what we have here are really the global sea-level changes," Cotterill said. During the expedition, Cotterill and the other scientists worked 12-hour shifts, either from noon until midnight, or from midnight until noon, bringing up long, spindly shafts of the buried reef.

Scientists have long known that corals are the unwitting record-keepers of the deep, chronicling minute changes in ocean temperature, salinity, chemistry and even sea levels as they slowly grow and add to their calcium-carbonate skeletons.

"Some species grow in bands, like tree rings," Cotterill told OurAmazingPlanet, "and as they grow they have to extract certain things from the water to form the skeletons, so you get that chemical signature trapped within each of the bands."

In addition to revealing the secrets of the oceans' composition, coral colonies reveal the extent of the oceans' reach. Certain species only grow at certain depths, Cotterill said, so examining the arrangement of species in a reef reveals how deep or shallow the water was when the coral was alive.

Andre Droxler, a professor at Rice University and one of the scientists analyzing the ancient coral, said that during the last glacial period, sea levels were almost 400 feet (120 meters) lower than what they are today.

When enormous ice sheets formed some 23,000 years ago, "you have to take the water from somewhere," Droxler said, "so sea level dropped."

Although that may seem like a long time ago, Droxler said that in light of the Earth's 4.5 billion-year history, 20,000 years is just a blink of an eye. "Even for our species!" he said.

"We were well established at the time. So in fairly recent times we have this extreme cold, and then 10,000 years ago, when finally the Earth went back into a warm period, agriculture started," Droxler said. "So we, as Homo sapiens, are intimately linked to the climate, no doubt."

Initial analysis from a July conference suggests the team dug up corals even more ancient than they'd hoped. Some of the coral is at least 60,000 years old, which may allow for an even more complete picture of the planet's changing sea levels.

The IODP/ECORD scientists will release their findings in July 2011, at which point the coral samples they retrieved will be available to other researchers for study.