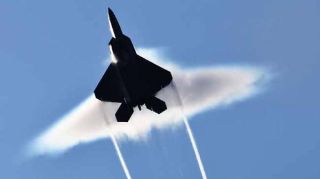 A U.S. Air Force F-22 Raptor executes a supersonic flyby over the aircraft carrier USS John C. Stennis in the Gulf of Alaska on June 22, 2009. The visual effect was created by moisture trapped between crests of sound waves.
(Image: © U.S. Navy/Ronald Dejarnett)

The breaking of the sound barrier is not just an audible phenomenon. In fact, Mach 1 can be beautiful.

The visual counterpart to a sonic boom, which sometimes but not always accompanies the breaking of the sound barrier, has also been seen with Apollo 11 moon-landing mission rocketed skyward in 1969.

The phenomenon is not well studied. Scientists refer to it as a vapor cone, shock collar, or shock egg, and it's thought to be created by what's called a Prandtl–Glauert singularity.

At sea-level pressure in 59-degree Fahrenheit air, sound travels 760 mph. As an aircraft surpasses this speed (Mach 1) the pressure of the air surrounding it approaches infinity.

A layer of water droplets occasionally gets trapped between two high-pressure surfaces of air flowing off the aircraft, scientists say. In humid conditions, condensation can gather in the trough between two crests of the sound waves produced by the jet. This effect does not necessarily coincide exactly with the breaking of the sound barrier, although it can.

For the record, on Oct. 14, 1947, U.S.A.F. Major Charles "Chuck" Yeager flew into aviation history by piloting a Bell XS-1 research plane to supersonic speeds. These days NASA is flying unmanned aircrafts at close to Mach 10 velocity. The origins of the Mach number stretch back before humans ever took flight, to 1887, when Austrian physicist Ernst Mach established his principles of supersonics. His famous Mach number is the ratio of an object's velocity to the velocity of sound, relative to the local environment.

Research and writing by Robert Roy Britt and Ben Mauk.