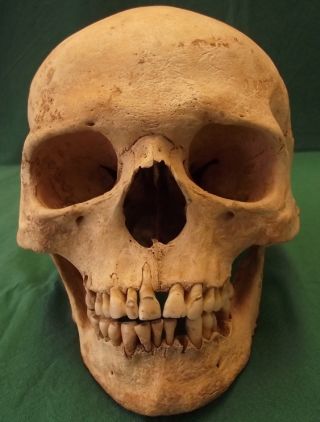 Leprosy causes deformaties of the skull, seen in this medieval skull from Winchester, UK.
(Image: © Image courtesy of University of Winchester)

Chances are, the mention of leprosy brings to mind skin falling from the bone and people cast away into quarantined colonies to prevent outbreaks. While this may have been a reality for those in the past, modern technology and treatments have made this disease a little less scary.

Leprosy is a contagious, chronic disease caused by Mycobacterium leprae, a rod-shaped bacterium. The disease is also called Hansen's disease, after a Norwegian doctor, Armauer Hansen. Hansen was the first to discover the bacterium that causes leprosy and published a paper on it in 1873, according to an article in the Indian Journal of Dermatology.

Leprosy affects not just the skin, but also the peripheral nerves, mucosa of the upper respiratory tract and the eyes. If left untreated, the disease can be debilitating and cause muscle weakness, disfigurement, permanent nerve damage in the arms and legs and loss of sensation in the body.

There are two common forms of leprosy: tuberculoid and lepromatous. Lepromatous is more severe and can causes large lumps and bumps on the body.

Though it is contagious, Hansen's disease isn't highly infectious. This disease is transmitted through droplets expelled by sneezes and coughs or by coming in contact with nasal fluids on surfaces. Just touching someone with the disease usually doesn't cause infection, as previously thought.

Normally, a person's immune system can prevent infection. Children are more at risk for contracting leprosy than adults, according to the U.S. National Library of Medicine (NLM).

Leprosy has been in the news lately — but is it coming back, or has the disease always been around and people just didn't talk about it? "In 2000, it was declared 'eliminated as a public health problem' at a global level and by 2005 it was eliminated in many countries," said Dr. Paul Saunderson, medical director of American Leprosy Missions. "This is why leprosy may receive less news coverage and certainly that could be the case for developed countries. However, there are still 14 countries worldwide that are highly endemic for leprosy or have pockets which are highly endemic and new infections still occur in about 100 countries. There is some news flow from these countries and today, leprosy NGOs all over the world are supporting a final, increased commitment to rid the world of leprosy."

According to the World Health Organization (WHO), official figures from 121 countries showed 213,899 new cases of leprosy were reported in 2014. About 100 cases per year are diagnosed in the United States, usually in Hawaii, California, the U.S. Virgin Islands and Guam, according to the NLM.

The bacterium that causes leprosy grows very slowly and can take two to 10 years before signs and symptoms appear, according to the Centers for Disease Control and Prevention (CDC).

Some symptoms may include:

Early detection and treatment of leprosy is key. If it is caught and treated quickly enough, the disease usually is not debilitating. Typically, the medical professional will order a skin test, either a skin-lesion biopsy or a skin-scraping examination, to test for leprosy.

Once the diagnosis is made, antibiotics, such as rifampin, dapsone, fluoroquinolones, clofazimine, macrolides and minocycline, are used to kill the bacteria. The diagnosis may include more than one antibiotic. Prednisone, aspirin or thalidomide may be prescribed to control inflammation, according to the NLM. More than 16 million leprosy patients have been treated with multi-drug therapy (MDT) over the past 20 years, according to the CDC.

People once were isolated from the rest of the population to prevent the spread of leprosy. That isn't the case today. "This is because in 1980s multidrug therapy was introduced that provided a rapid and complete cure for leprosy," said Saunderson. "Until then, people who were diagnosed or who had symptoms of leprosy were often banished from their communities to live in leprosaria [leper asylums]. Despite this cure for leprosy, the stigma of leprosy, especially for those people who have been diagnosed late and have developed visible impairments, is still considerable. Although multidrug therapy is very good once it is started, the incubation period of leprosy is very long (several years), so transmission still continues before a person is diagnosed and put on treatment."

The dead bacteria may also stay in the body for several years, even after the treatment is finished. "It can take up to six years for the bacilli to be completely cleared from the body, although the bacilli will be dead after just a few doses of multidrug therapy," said Saunderson. "This explains why reactions can continue to occur long after multidrug therapy has been completed. We think the reason for this is the nature of the mycobacterial cell wall, which is very complex and constructed from various lipids, etc., which hang around and have to be removed bit by bit by the immune system."