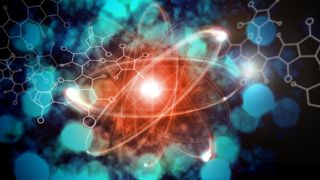 Iran claims it has enriched uranium to 4.5%, breaking the limit of 3.67% set during the 2015 nuclear deal. The move was a response to the U.S. violating the terms of the deal under President Donald Trump's administration. But what does the enrichment news mean?

To a certain extent, this is a question with a simple, chemical answer. As the U.S. Nuclear Regulatory Commission explains on its website, uranium comes in a few different forms (or "isotopes"). All of them have the same number of protons (92) but a different number of neutrons. By far, the most common such isotope in nature is uranium-238, which has 146 neutrons. On Earth, this isotope makes up 99.3% of any sample of naturally occurring uranium.

But for nuclear reactors (or bombs), that flavor isn't very useful. Dense clusters of uranium-238 don't tend to start nuclear chain reactions. The second most common isotope, however, uranium-235 (making up just about 0.7% of any sample of natural uranium and containing 143 neutrons), does tend to start nuclear chain reactions. In these reactions, the nuclei of the uranium atoms split into smaller nuclei and release neutrons. Those neutrons then cause other nuclei to split, releasing more neutrons for a self-sustaining "chain" reaction that emits enormous amounts of energy. [Top 10 Ways to Destroy Earth]

So does Iran's breaking of its enrichment threshold mean that the country is now significantly closer to having a bomb?

As the Associated Press reported, 4.5% is enriched enough for Iran to power its peaceful, already-active Bushehr nuclear reactor. But that level falls far short of the standard 90% threshold for "weapons-grade" uranium.

And enriching uranium to 90% is an enormous technical challenge. It requires building and operating very advanced centrifuges. If you've followed news of international attempts to sabotage the Iranian nuclear effort, you know that the most successful effort — a computer virus called Stuxnet — attacked Iranian centrifuges.

Centrifuges are common enough pieces of laboratory equipment. They spin samples of material around so as to generate centrifugal force. Under that intense force, heavier and lighter materials tend to separate.

However, a common laboratory centrifuge is nowhere near powerful enough to separate uranium-235 from uranium-238. The two isotopes are nearly, but not quite, identical in mass. And a sample of uranium contains very little uranium-235.

As Live Science previously reported, a country seeking to enrich uranium must first transform a uranium sample into a gas. Then, that gas must be whipped up to intense speeds in powerful industrial centrifuges to cause the two isotopes to separate, before the uranium atoms get extracted from the gas once again.

To extract the 137 lbs. (62 kilograms) of uranium-235 necessary to build the bomb dubbed "Little Boy" that was dropped on Hiroshima, Japan, the United States in 1945 expended a full 10% of its national energy supply, according to "The Making of the Atomic Bomb" (Simon & Schuster, 1995). The original uranium sample weighed 4 tons (3,600 kilograms). And 20,000 people helped build the refining facility that made the bomb, a facility that required 12,000 people to operate.

It's not infeasible that Iran could enrich a significant stockpile of weapons-grade uranium. But the 4.5% mark doesn't represent a significant step in that direction, except in symbolic terms. Iran has also threatened to enrich uranium to 20%, which is closer but still not weapons grade. The question now is whether the breakdown of the nuclear deal, precipitated by the U.S., continues to escalate tensions.