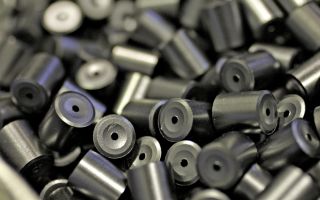 Uranium pellets cool in a tray after passing through a furnace inside the Ulba Metallurgical Plant in Ust-Kamenogorsk, Kazakhstan in 2007.
(Image: © Daniel Acker/Bloomberg/Getty)

Now that President Donald Trump has pulled the United States out of the nuclear deal with Iran, people across the world are wondering if the Middle Eastern country will invest its energies in building a nuclear weapon.

But if Iran's leadership does decide to pursue an atomic bomb, how would researchers get enough uranium, the key ingredient?

Uranium enrichment is one of the key steps in building nuclear weapons. Only a certain type of uranium works in nuclear reactors and bombs. Separating that type of uranium from the more common variety requires a great deal of engineering skill, despite the fact that the technology needed to do it is decades old. The challenge lies not in figuring out how to separate uranium, but in constructing and running the equipment needed for the task. [Doomsday: 9 Real Ways Earth Could End]

Uranium atoms, like the atoms of every element, occur in nature in varieties called isotopes. (Each isotope has a different number of neutrons in its nucleus.) Uranium-235, an isotope that makes up less than 1 percent of all-natural uranium, provides the fuel for nuclear reactors and nuclear bombs, while uranium-238, an isotope that makes up 99 percent of natural uranium, has no nuclear use, said Russell Nietert, an associate laboratory director for nuclear science and engineering at Argonne National Laboratory in Argonne, Illinois.

To separate the tiny quantity of uranium-235 that is present in every natural sample of uranium ore, engineers first use a chemical reaction to turn the uranium into a gas, said Jeff Binder, the isotope production program manager at Oak Ridge National Laboratory in Oak Ridge, Tennessee.

Then, the gas is put into centrifuge tubes – cylindrical tubes the size of a person or larger. Each tube is spun on its axis at incredibly high speeds, pulling the heavier uranium-238 gas molecules toward the wall of the tube, leaving the lighter uranium-235 gas molecules closer to the axis, or center of the tube, where they can be pumped out, Binder told Live Science.

Each time the gas is spun in a centrifuge, only a small amount of uranium-238 gas is removed from the mixture, so the tubes are used in series. Each centrifuge pulls out a little bit of uranium-238, and then passes the slightly refined gas mixture onto the next tube, and so on, until many hundreds of thousands of spins later, the gas remaining in the tube is almost entirely composed of uranium-235, Binder said.

"You know the end of Indiana Jones [Raiders of the Lost Ark] where they are storing things and you can't see the end of it? That's what these buildings look like," said Jerry Klein, who was a business manager of the isotope production program at Oak Ridge National Laboratory at the time Live Science first reported on the story. "Just row after row of centrifuges. Just hundreds and thousands of them."

After separating the gaseous uranium-235 through many centrifuge steps, engineers use another chemical reaction to convert the gas uranium back into a solid metal, Klein said. That metal can then be shaped for use in either reactors or bombs. [Top 10 Ways to Destroy Earth]

Because each step only purifies the uranium gas mixture by a small amount, nations can only afford to run centrifuges that are engineered to the highest levels of efficiency, said Nietert. Otherwise, producing even a small amount of pure uranium-235 becomes prohibitively expensive.

And designing and making those centrifuge tubes requires a level of investment and technical know-how beyond the reach of many countries, said Nietert. The tubes require special types of steel or composites to withstand the extreme pressures of rotation, must be perfectly cylindrical to maximize efficiency, and are manufactured by specialized machines almost as difficult to build as the tubes themselves, Nietert said.

To put the endeavor of separating uranium into perspective, take the example of the building of the bomb that the United States dropped on Hiroshima.  The United States needed 137 pounds (62 kilograms) of uranium-235 to make the bomb, according to "The Making of the Atomic Bomb" (Simon & Schuster, 1995).

Separating those 137 pounds from almost 4 tons of uranium ore took place in world’s largest building and used 10 percent of the entire country’s electricity, Nietert said. It took 20,000 people to build the structure, 12,000 people to operate the facility, and cost more than $500 million, in 1944, to equip it, according to "The Making of the Atomic Bomb." That’s around $7.2 billion in 2018 dollars, according to the Bureau of Labor Statistics.

Editor's Note: This story was updated to clarify how the centrifuge process works. This story was originally published on May 18, 2010 and updated on May 8. 2018. Original article on Live Science.