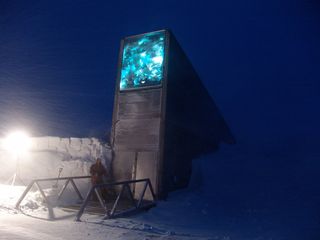 The ongoing civil war in Syria has led to the first-ever withdrawal from the Svalbard "doomsday" Global Seed Vault, a giant storage unit for plant seeds that's tucked into the side of a frigid mountain in Norway.

Established in 2008, the seed vault serves as a safe haven for the world's vast variety of edible plant seeds. In the event of a nuclear war or catastrophic natural disaster, the vault keeps "backup" seeds frozen and safe until they can be reclaimed.

So far, seeds have only gone into the vault for storage, not come out. But this week, researchers in the Middle East asked to withdraw seeds that they had previously deposited into the seed bank, according to the Global Crop Diversity Trust, the international organization that manages the doomsday vault in cooperation with the Norwegian government. The withdrawn seeds were needed to replace plant material stored in a gene bank (a facility that stores genetic material) near the war-torn city of Aleppo in Syria. [7 Perfect Survival Foods]

The reclaimed seeds included varieties of wheat, barley, grass pea and other important food crops that are maintained by the International Center for Agricultural Research in the Dry Areas (ICARDA), a nonprofit research organization that aims to improve the livelihoods of people in resource-poor areas across the Near East and North Africa. After the war damaged its facility in Syria, ICARDA moved its headquarters to the Lebanese capital of Beirut.

While it may sound like bad news that seeds have been removed from the so-called doomsday vault, the withdrawal actually serves as proof that such a vault is necessary, Brian Lainoff, a spokesman for the Crop Trust, told The WorldPost.

Constructed as a sort of last-ditch effort at protecting plants from extinction, the seed bank is meant to serve as a backup for gene banks like ICARDA, Lainoff said.

"If something were to happen to one of those collections around the world, they can always come back to the seed vault and retrieve what might have been lost," Lainoff told The WorldPost.

Seeds stored in the Svalbard vault, which is built right into a sandstone mountain and covered in a thick layer of permafrost, are kept at an icy minus 0.4 degrees Fahrenheit (minus 18 degrees Celsius). Should the power at the facility fail for any reason, the seeds will likely stay frozen thanks to the permafrost that covers the vault.

And there's very little chance that any ne'er-do-wells could make off with the world's most precious supply of seeds. The vault is secured by four sets of locked doors, according to the Crop Trust. There are also the Svalbard archipelago's most notorious security guards to consider. Located about 800 miles (1,300 kilometers) from the North Pole, the area surrounding the vault is extremely remote, secluded and home to a number of polar bears.

Right now, the vault holds just less than 865,000 seed samples from all over the world, but it's capable of holding many more. In total, the vault can handle about 2.5 billion seeds (or about 500 seeds each from about 4.5 million varieties of crops).

You can learn more about the Svalbard Global Seed Vault and take a virtual tour of the underground facility by visiting the Crop Trust website.