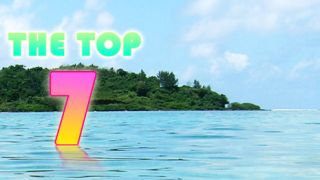 If you could take only seven kinds of food to a deserted island, what would they be? Bacon might top your list, but you won't have a cardiologist to bail you out when your arteries fill with fat.

Diets benefit from being diverse. U.S. health organizations advocate eating five servings of fruit and vegetables a day. In Denmark the number is six, not because they want to be healthier but because six sounds like the word "sex" in Danish, and the campaign plays on the pun of "sex every day." The Japanese try to eat 30 different kinds of food each day.

But sticking just to the following seven foods would likely serve you better than the typical American diet and meet your needs for macronutrients (protein, carbohydrates and fats) and micronutrients (vitamins and minerals).

As with berries, most beans are highly nutritious. Black (turtle), red (kidney), pinto and soy top many nutritionists' lists of so-called superfoods. This will probably be your best source of calcium and iron on the island. Beans are a versatile island food, too, for once dried the keep for a long time. And if you are alone on the island, why worry about flatulence?

While most leafy green vegetables will do you good, kale is particularly rich in vitamins, minerals and fiber. You can boil the stems for a simple vegetable broth. Kale was bred from wild cabbage, and close cousins include broccoli, Brussels sprouts, cauliflower, cabbage, collard, kohlrabi, mustard and rapini.

As with berries, cantaloupe is both tasty and nutritious. Although a little high in sugar, it is too good a source of vitamins A and C and potassium to pass up. Its lack of fat and lower glycemic load index makes cantaloupe a slightly better pick than bananas.

Blueberries, raspberries, wolf berries ... take your pick if they are available for picking. Few foods match berries in flavor, vitamin content and antioxidant potency. To this list add kiwifruit, once called the Chinese gooseberry but changed for marketing reasons. Kiwifruit has more vitamin C than oranges and about as much potassium as a banana. Beware of poisonous berries, such as holly, Franken Berry and Boo Berry. Nasty stuff.

Could anything be sexier than oats? Yes, it's barley! Okay, maybe both grains just remind you of Wilford Brimley having a good bowel movement. But barley, more so than oats and other whole grains, lowers "bad" LDL cholesterol levels and raises "good" HDL. As with other grains, barley has essential vitamins (such as niacin and other B vitamins) and minerals (manganese and selenium) that are otherwise not so abundant in fruits. And if you have enough of it on your island, you can brew up some beer or whisky.

Where there's sea, there's seaweed. Even the laziest among us can harvest what gets washed up. Kelp, alaria and laver (kombu, wakame and nori in Japanese cuisine) are among the most common. Almost all kinds are edible. Seaweed is loaded with vitamins and minerals. Once dried it will keep of months, too. Seaweed is a regular part of the Asian diet, and most Japanese homes will have four or five kinds on hand. Even if you avoid sushi, you've eaten seaweed in ice cream. Irish moss (carrageenan) is a thickening agent.

Chances are, being on an island, you'll have fish around. If a river runs through it, and if that river has salmon, then you're really in luck. Salmon is rich in omega-3 fatty acids, which is good for your heart. Any fish, though, is a good source of healthy fat and protein. Best of all, you can eat most ocean fish raw, in case you forgot to bring your top seven favorite Zippo lighters. If you decided to bring no other animal food products to the island, then fish will be your sole source of vitamin B12.