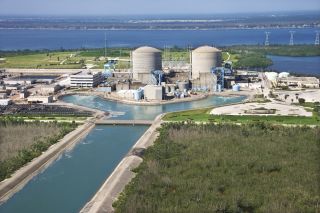 About one-third of the nuclear engineers in the United States work in electric power generation.
(Image: © iofoto | Shutterstock)

While the field of nuclear engineering has branched out into a number of specialized categories, its greatest growth has been in the development of nuclear power plants, according to Encyclopedia Britannica. Nuclear power currently provides 13 percent of the world's electricity, according to the American Society of Mechanical Engineers (ASME). More than 430 nuclear power plants are in service in 31 countries around the world; 100 of them are in the United States.

The nuclear age began in 1939, when two German physicists, Otto Hahn and Fritz Strassman, split a uranium atom. Continuing their research, Lise Meitner, an Austrian-born physicist who had fled to Sweden after Hitler's invasion of her country, realized that the split had also released energy, in a process known as fission. Warned in a letter signed by several scientists, including Albert Einstein, that Germany could develop a powerful weapon, the United States launched the Manhattan Project, a top-secret endeavor to create an atomic bomb. After this successful effort, the country dropped two atomic bombs on Japan in 1945, ending World War II. [Related: What Is Fission?]

During the war and afterward, many physicists made great contributions to the advancement of atomic theory, while a few others put those theories into practice. These physicists may not have called themselves engineers, but they were the first practitioners of nuclear engineering.

Some of the most prominent figures at the onset of the nuclear age include:

After the war, physicists explored peaceful uses of nuclear energy. The United States established several national laboratories, including Los Alamos, Oak Ridge, Lawrence Livermore and Argonne national laboratories. While these centers were established primarily for the development, production and support of the U.S. nuclear weapons program, they moved into many other areas of research, including nuclear power generation, strategic defense, supercomputers, accelerator science, and cooperative research and development agreements (CRADAs) with private industry.

The military, particularly the U.S. Navy, has had a great influence on advancements in nuclear engineering. In addition to developing nuclear weapons, the military made great contributions to nuclear power generation. Adm. Hyman G. Rickover, the "Father of the Nuclear Navy," advocated for production of the first nuclear submarine, the USS Nautilus, which was ordered in 1951 and launched in 1954. Rickover led the nuclear submarine program, and over the next three decades, spearheaded the design and construction of dozens of nuclear-powered submarines and aircraft carriers.

What does a nuclear engineer do?

The duties of a nuclear engineer typically include:

Safety is a primary concern for nuclear engineers. According to the Massachusetts Institute of Technology course on nuclear reactor safety, nuclear engineers are responsible for accident prevention through proper design and training; protection through monitoring and control systems, active shutdown and cooling systems; and mitigation to limit consequences through engineered safety systems. Nuclear engineers are also responsible for ensuring the safe handling of radioactive materials in accordance with a large number of federal regulations. This responsibility includes monitoring exposure to workers in nuclear facilities and to patients and staff in health care facilities.

Nuclear engineering requires several critical skills, including an in-depth understanding of nuclear physics, nuclear chemistry, mathematics and materials. More and more, nuclear engineers rely on computer-aided design (CAD) systems to design systems and equipment. They must also be familiar with computerized control equipment for reactors and accelerators, as well as computer simulations for modeling a variety of systems and equipment. A comprehensive list of necessary skills and abilities for nuclear engineers can be found at MyMajors.com.

Most nuclear engineer jobs require at least a bachelor's degree in engineering. Additionally, some employers may require state certification as a professional engineer and certification by the Professional Engineering Examination Committee (PEEC) of the American Nuclear Society (ANS). Promotion to management often requires master's degree, and engineers need ongoing education and training to keep up with advances in technology, testing and monitoring of equipment, computer hardware and software, and government regulations.

What is the future of nuclear engineering?

The BLS states, "Employment of nuclear engineers is projected to grow 9 percent from 2012 to 2022, about as fast as the average for all occupations. Employment trends in power generation may be favorable because of the likely need to upgrade safety systems at power plants." There should be many opportunities for highly qualified applicants, particularly those who have kept abreast of the latest developments in technology and regulations. Good grades from a highly rated institution should give a job seeker an advantage over the competition.