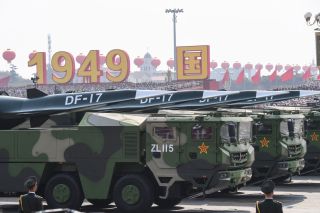 Military vehicles carrying DF-17 missiles parade through Tiananmen Square in Beijing on Oct. 1, 2019, celebrating the 70th anniversary of the founding of the Peoples Republic of China.
(Image: © GREG BAKER/AFP/Getty Images)

The missile is designed to move very fast, even for a ballistic missile. (That's why they call it "hypersonic.") It approaches its target at a lower altitude. And it can make abrupt changes in direction that make it hard to track or hit with an interceptor.

"China's military shows off a new hypersonic ballistic nuclear missile believed capable of breaching all existing anti-missile shields deployed by the U.S. and its allies," the AP wrote above a link to an article describing the event.

The AP isn't wrong. The Dongfeng-17, described as a "hypersonic glider," is specifically designed to be more difficult than usual to knock out of the sky, according to multiple news reports. But Americans don't need to worry that China is suddenly able to breach the safety and security of U.S. missile defenses. That's because U.S. missile defenses aren't safe or secure at all, experts have long said.

As Laura Grego, a senior scientists and expert in nuclear issues at the Union of Concerned Scientists wrote back in 2017, the only shield the U.S. has is the Ground-based Midcourse Defense (GMD). But the GMD basically doesn't work. It's not well-tested, Grego said. In tests conducted under ideal conditions — no bad weather, no countermeasures — the GMD has only been able to knock a missile out of the sky four out of 10 times. In the real world, she wrote, we should expect them to work even less often.

It's just very hard to hit a missile with a missile in outer space.

Related: Could the US Stop Nuclear Weapons?

But there's a more basic problem. Even setting aside that most missile defense plans involve trying to hit one missile with about four interceptor missiles, the U.S. simply doesn't have enough interceptors to stop a nuclear attack from a country like China under the best of conditions, according to news reports. Right now, according to Defense News, the U.S. has a total of 44 interceptors in place. China, according to the South China Morning Post, has 280 warheads. That's a much smaller arsenal than the U.S. or Russia, but more than enough to hit most major U.S. cities in a nuclear war even if all 44 interceptors worked perfectly to knock 44 missiles out of the air.

All that said, missile defense tech isn't harmless. As Live Science has previously reported (back when Russia debuted a similar missile system) the one thing we do know about this sort of technology is it can encourage a nuclear arms race — driving competitor countries to focus their efforts on making their nukes more and more deadly in turn. And that puts everyone in danger.