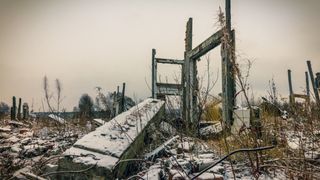 If Russia and the United States launched an all-out nuclear war, it would spell disaster for everyone on Earth, a new study suggests. Not only would explosions, fires and radiation exposure kill millions in targeted cities, but a "nuclear winter" lasting months to years would also drastically alter the Earth's climate, causing freezing summers and worldwide famine.

The Cold War may be over, but nuclear bombs are still uniquely destructive, and there's more than enough of them to cause climate catastrophe, said study co-author Alan Robock, an environmental scientist at Rutgers University in New Jersey.

But they're not. When a nuclear bomb explodes, one-third of its energy goes into an immediate explosion of heat and light, according to a review published in the journal WIREs Climate Change. An aftershock follows this explosion, leveling any structures around the detonation and creating piles of kindling ready to catch fire. Then, as fires rage, smoke billows into the atmosphere. While rain would wash out some of that smoke, much of it would drift into the stratosphere, where it could linger above the clouds, blotting out the sun. That's what would cause nuclear winter.

The authors of the new study, published July 23 in the Journal of Geophysical Research: Atmospheres, used modern climate models to calculate the effects of smoke from nuclear explosions on Earth's temperature, wind patterns and more. Their study wasn't the first to model the effects of nuclear winter; in 2007, a team of researchers led by Robock ran a similar simulation.

However, this new study looked at Earth in higher resolution than the earlier research, said Robock. The recent research also looked at more locations and included processes not described by the previous model, like the effects of soot on atmospheric chemistry and the influence of nuclear winter on the oceans.

Even with the updated calculations, the outcome of nuclear winter was bleak. That gives Robock more confidence that the outcomes suggested by these models are accurate predictions he said.

"People criticize models because they're imperfect," Robock said, "but if you can reproduce the model, you can have confidence in your result."

"There really would be a nuclear winter with catastrophic consequences," Joshua Coupe, a doctoral student in atmospheric science at Rutgers University and lead author of the study, said in a statement.

The researchers found that if the U.S. and Russia were each to launch their entire nuclear arsenals at one another, soot would drift high into the atmosphere, blotting out the sun for months to years. Summers would become a thing of the past, with temperatures throughout much of the Northern Hemisphere dipping below freezing year-round. Growing seasons would be cut by 90%, and most of the world would be plagued by famine.

In addition to dropping surface temperatures, nuclear winter would have a major impact on everything from ocean currents to the jet stream. The study's model predicted a seven-year-long El Niño, a normally yearlong weather pattern in the Pacific Ocean that usually occurs only every three to seven years. It leads to either drought or extreme rainfall in affected regions.

During a nuclear winter, people turning to the oceans to supplement dwindling crops would be disappointed, as much of the ocean's biodiversity would also disappear. Finally, as if the effects on climate weren't enough, soot would poke huge holes in the ozone layer, bombarding the surface of Earth with ultraviolet radiation.

This isn't the first time scientists have warned of the potentially disastrous climatic consequences of nuclear war. In the early 1980s, the height of the nuclear arms race, scientists (including astronomer Carl Sagan) first hypothesized that smoke from nuclear explosions could blot out the sun, drastically altering Earth's climate. The term "nuclear winter" was coined in 1983, when a landmark study in the journal Science calculated that temperatures could fall below freezing in the middle of continents.

Because of the international campaign to abolish nuclear weapons, nuclear arsenals have decreased over time. Whereas there were more than 50,000 nuclear weapons worldwide in the 1980s, there are now a comparatively small 8,500 worldwide, Robock said. But that doesn't mean the threat is gone.

In fact, "it's gotten worse," Robock said. "Before, there were only two countries with nuclear arsenals" (the U.S. and Russia). Now, there are nine, according to the Federation of American Scientists.

"The problem isn't solved," Robock said. "Even though the arsenals have gone down, it's still enough to create a nuclear winter."