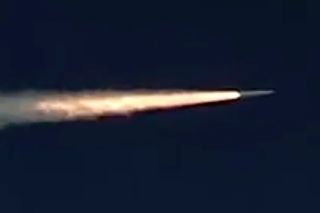 Missiles that spit out warheads traveling up to 20 times the speed of sound and with the ability to perform elusive acrobatics may be too much for U.S. defenses to block.

That's according to the head of the U.S. Strategic Command, Air Force Gen. John Hyten, who testified before the Senate Armed Services Committee yesterday (March 20).

When asked by Sen. Jim Inhofe, R-Okla., what kind of defenses the U.S. has against hypersonic weapons, Hyten replied: "We have a very difficult — well, our defense is our deterrent capability. We don't have any defense that could deny the employment of such a weapon against us, so our response would be our deterrent force, which would be the triad and the nuclear capabilities that we have to respond to such a threat," Military.com reported. [7 Technologies That Transformed Warfare]

But weapons that can travel well above the speed of sound seem to be a real threat, as both Russia and China are "aggressively pursuing" such hypersonic weapons, Hyten also said, as reported by CNBC.

This nuclear-powered cruise missile could travel unlimited distances, and, unlike ballistic missiles, it could cruise low to the ground where it would be obscured by other objects — meaning it would evade radar detection, Live Science previously reported.

"In theory, a cruise missile carrying a nuclear bomb could slip under American defenses and detection systems, and detonate before Americans could mobilize a response," Live Science reported. [Could the US Stop Nuclear Weapons?]

Even so, Gen. Hyten assured the Senate Committee that U.S. defenses are prepared for such a battle. "The first, most important message I want to deliver today is that the forces under my command are fully ready to deter our adversaries and respond decisively, should deterrence ever fail. We are ready for all threats," Hyten said in his opening remarks, according to a Department of Defense statement.

Other generals have suggested supplementing the U.S. defense arsenal with low-yield nukes, or those that pack less power. In addition, space-based detection systems could theoretically detect and track hypersonic missile threats, Lt. Gen. Samuel Greaves, director of the Missile Defense Agency, said on March 6, according to Military.com.

"To maintain military superiority in this multipolar, all-domain world, we must out-think, out-maneuver, out-partner and out-innovate our adversaries," Hyten said. "Deterrence in the 21st century requires the integration of all our capabilities, across all domains, enabling us to respond to adversary aggression anytime, anywhere."