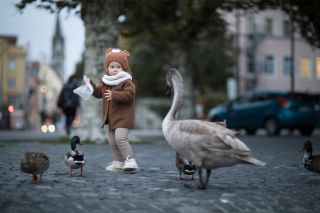 When facing down a ferocious lion, an oncoming car or maybe just an impending deadline, our bodies trigger a physical stress response that prepares us to either fight or flee the scene. This "fight-or-flight" response is driven by the sympathetic nervous system, a normally harmonized network of brain structures, nerves and hormones that, if thrown off balance, can result in serious complications.

The sympathetic nervous system makes up part of the autonomic nervous system, also known as the involuntary nervous system. Without conscious direction, the autonomic nervous system regulates important bodily functions such as heart rate, blood pressure, pupil dilation, body temperature, sweating and digestion, according to a review in the American Journal of Pharmaceutical Education. Research suggests that distinct types of nerve cells, called neurons, control these different physical reactions by directing the action of skeletal muscle, cardiac muscle and gland secretion. The system allows animals to make quick internal adjustments and react without having to think about it.

The sympathetic nervous system directs the body's rapid involuntary response to dangerous or stressful situations. A flash flood of hormones boosts the body's alertness and heart rate, sending extra blood to the muscles. Breathing quickens, delivering fresh oxygen to the brain, and an infusion of glucose is shot into the bloodstream for a quick energy boost. This response occurs so quickly that people often don't realize it's taken place, according to Harvard Medical School. For instance, a person may jump from the path of a falling tree before they fully register that it's toppling toward them.

The sympathetic nervous system doesn't destress the body once the tree is felled or the danger has passed. Another component of the autonomic nervous system, the parasympathetic nervous system, works to calm the body down, according to the Clinical Anatomy of the Cranial Nerves, published in 2014 by Academic Press. To counter the fight-or-flight response, this system encourages the body to "rest and digest." Blood pressure, breathing rate and hormone flow return to normal levels as the body settles into homeostasis, or equilibrium, once more.

The sympathetic and parasympathetic nervous systems work together to maintain this baseline and normal body function.

Structures in the brain, spinal cord and peripheral nervous system support the function of the sympathetic nervous system, according to a 2016 review in the journal BJA Education. Receptors in internal organs of the chest and abdomen collect information from the body and send it up to the brain through the spinal cord and cranial nerves. The hypothalamus, a brain structure important for regulating homeostasis, receives signals from the body and tunes the activity of the autonomic nervous system in response.

This brain structure also gathers information from areas higher in the brain, such as the amygdala, according to a review in the journal Biological Psychiatry. Often called the emotional brain, the amygdala pings the hypothalamus in times of stress.

The hypothalamus then relays the alert to the sympathetic nervous system and the signal continues on to the adrenal glands, which then produce epinephrine, better known as adrenaline. This hormone triggers the profuse sweating, rapid heartbeat and short breaths we associate with stress. If the danger persists, the hypothalamus sends a new message through the nerve system grapevine, instructing the adrenal glands to produce the hormone cortisol to keep the stress response rolling.

What happens when it doesn't work?

The sympathetic and parasympathetic nervous systems rest on either side of a wobbling scale; each system remains active in the body and helps counteract the actions of the other. If the opposing forces are mostly balanced, the body achieves homeostasis and operations chug along as usual. But diseases can disrupt the balance.

The sympathetic nervous system becomes overactive in a number of diseases, according to a review in the journal Autonomic Neuroscience. These include cardiovascular diseases like ischemic heart disease, chronic heart failure and hypertension. A boost of sympathetic signaling raises the blood pressure and enhances tone in smooth muscles, which may cause hypertension.

"Everyone thinks about Parkinson's disease in terms of its motor symptoms, but these autonomic symptoms actually appear long before," said Dr. Marina Emborg, director of the Preclinical Parkinson's Research Program at the University of Wisconsin-Madison. Changes in sympathetic nervous activity are evident in the skin, pupils and especially the heart.

"Some patients [with Parkinson's] describe that they are more tired or have fatigue, but really, problems in the heart contribute to these overall symptoms," Emborg told Live Science.

Parkinson's damages the sympathetic neurons that help maintain levels of epinephrine and norepinephrine in the body — chemicals that tell the heart when to pump harder, such as when you move to stand up or exercise. Damage to these neurons can result in a lack of blood flow in patients with Parkinson's, so they often feel lightheaded upon standing, which dramatically increases their risk of falls.

Sympathetic dysfunction also underlies mental health conditions such as anxiety, depression and chronic stress, an article in Forbes reported. In short bursts, the body's physical stress response can be useful and grant an energizing boost of mental focus. If prolonged, however, the stress signals whizzing through the body wreak havoc. Besides maintaining a mental feeling of constant stress, the extra epinephrine and cortisol damage blood vessels, increase blood pressure and promote a buildup of fat.

So, while the fight-or-flight response serves a purpose, you don't want it switched on all the time.