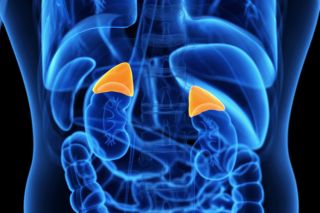 The adrenal glands sit atop the kidneys.
(Image: © Sebastian Kaulitzki/Shutterstock)

The adrenal glands affect metabolism, blood pressure, the immune system, sex hormones and the body's response to stress. The human body has two adrenal glands. About 1 inch by 2 inches (2.54 centimeters by 5.08 cm), they sit on top of the kidneys.

Along with the parathyroid glands, pituitary gland, thyroid gland, pancreas, ovaries (in females) and testicles (in males), the adrenal glands are part of the endocrine system. This system produces hormones that control just about every function in the body.

The hypothalamus acts as the body's thermostat, Engelman said. It senses most of the important physiological elements involved in homeostasis and sends out signals to correct perceived unhealthy variations. It connects directly to the pituitary gland, which essentially picks up the orders from the hypothalamus and sends out signals to various organs and glands, including the adrenals, to carry out these orders. The adrenal glands then produce a wide range of hormones, including estrogen, adrenalin and cortisol.

"One of the primary activities of cortisol is to increase available glucose to the nervous system by breaking down protein and fat to glucose in the liver," Engelman said. "It helps block glucose uptake into tissues other than the central nervous system."

Cortisol also has powerful anti-inflammatory and anti-allergy actions, according to Encyclopedia Britannica. It decreases the activities of the immune system to reduce inflammation conditions. Because of this, it is used to treat dermatitis, insect bites, inflammation from arthritis and ulcerative colitis.

One of the most important functions of the adrenal gland is the fight-or-flight response. When a person is stressed or frightened, the adrenal gland releases a flood of hormones, such as adrenaline and cortisol. These hormones increase the heart rate, elevate blood pressure, boost energy supplies, sharpen concentration and slow down other body processes so the body can run from or fight a threat.

Too much of a stress response is a bad thing, though. Too much exposure to elevated hormones from the adrenal gland can cause anxiety, depression, digestive problems, headaches, heart disease, sleep problems, weight gain and memory and concentration impairment, according to the Mayo Clinic.

There are many dysfunctions and diseases associated with the adrenal gland. One of them is the growth of tumors on the glands. These tumors can be benign or cancerous and can throw off the proper production of hormones. A tumor that causes the gland to create too much hormone is called a functioning tumor, while a tumor that causes too little hormone to be produced is called a nonfunctioning tumor. Approximately 4 to 12 out of 1 million people develop a type of adrenal tumor called adrenocortical carcinoma, according to American Society of Clinical Oncology. Some types of adrenal tumors may be linked to ADHD.

A "trendy" disorder is adrenal fatigue. It currently is not an accepted diagnosis option for the medical community at large. The Mayo Clinic defines adrenal fatigue as "a term applied to a collection of nonspecific symptoms, such as body aches, fatigue, nervousness, sleep disturbances and digestive problems." These symptoms are thought to be caused by a wide range of adrenal problems, such as low hormone production.

Engelman said he thinks the signs and symptoms of adrenal fatigue are not related to the ability of the adrenals to work, but rather decreased stimulation from an over-taxed central nervous system. The entire physiological system is based on the concept of maintaining homeostasis. "I have heard from lecturers and read many theories and controversies about 'adrenal fatigue,'" Engelman said. "The ones that make the most scientific sense to me relate to the down regulation of central nervous system receptors to stress signals. This ultimately decreases downstream stimulatory signaling to the adrenal glands as a brain self-protective mechanism from the damaging effects of long term stress."

Adrenal fatigue is thought to be a lesser form of adrenal insufficiency. Adrenal insufficiency (Addison's disease), a condition widely accepted by medical experts. It occurs when the adrenal gland does not produce enough hormones as a result of an underlying disease. Some symptoms are: