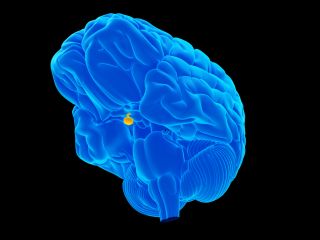 The pituitary gland is about the size of a pea. It is located in the brain, and sits just behind the bridge of the nose.
(Image: © Sebastian Kaulitzki/Shutterstock)

The pituitary gland is called the master gland of the endocrine system. This is because it controls many other hormone glands in the body. According to The Pituitary Foundation, without it, the body wouldn't reproduce, wouldn't grow properly and many other bodily functions just wouldn't function.

The pituitary gland is located in the brain, between the hypothalamus and the pineal gland, just behind the bridge of the nose. It is about the size of a pea and is attached to the brain by a thin stem of blood vessels and nerve cell projections. The frontal lobe is the biggest part of the pituitary. It makes up 80 percent of the gland's overall weight, according to the Merck Manual.

The master gland controls the thyroid gland, adrenal gland, ovaries and testicles. While it may be in charge of these glands, it gets it orders from its neighbor, the hypothalamus.

The pituitary gland also produces hormones for organs in the body, as well. It creates:

Most hormones are released every one to three hours and run in conjunction with the body's circadian rhythm. This means that hormone production is at its peak during the day hours and level off as night falls.  Other hormones rely on certain factors, such as the menstrual cycle, to determine production levels.

Most conditions of the pituitary gland are caused by cancerous or benign tumors and cysts. These growths are fairly common.  "One-sixth of people have a tumor or cyst of the pituitary," said Dr. Melanie Goldfarb, an endocrine surgeon and director of the Endocrine Tumor Program at Providence Saint John's Health Center and assistant professor of surgery at the John Wayne Cancer Institute in Santa Monica, California.

Most of these tumors are benign and don't spread, though, according to the Mayo Clinic. A tumor can cause the pituitary gland to not produce enough hormones, a condition called hypopituitarism, or to produce too much hormones, or both at the same time. When hormone production is thrown off, other glands can malfunction and produce too much or too little of their hormones. Organs that rely on pituitary hormones can also be affected. This can cause a wide range of disorders, such as gigantism, galactorrhea, erectile dysfunction and central diabetes insipidus.

Computed tomography (CT) or magnetic resonance imaging (MRI) may be used to track the growth of a tumor, and simple blood tests can be used to diagnose a pituitary gland problem.

In some instances, a tumor and some of the gland around it may need to be removed surgically. Luckily, this usually isn't a major problem.  "You can remove up to 95 percent [of the pituitary gland] and still have complete function," said Goldfarb.

Other than surgery, a doctor may treat tumors with hormone regulation through medication. Sometimes, nothing needs to be done to the growth because it isn't harming the patient. In these cases, medical professionals often wait and monitor the situation before taking action.