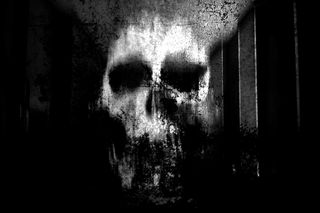 Fear is an involuntary reaction that helps us quickly respond to potential threats.
(Image: © Joe Prachatree/Shutterstock.com)

For many people, fall is the spooky season. Daylight wanes as nights become longer, a chill touches the air, and trees lose their leaves and take on a skeletal silhouette.

If that alone doesn't make you uneasy, Halloween's approach triggers an outpouring of decorations and costumes that embrace the macabre: jack-o'-lanterns with evil grins; skulls and bones; crumbling gravestones; bloodthirsty vampires; and shambling, rotted corpses lurching toward an impending zombie apocalypse.

It's enough to send shivers down your spine. But why do certain things frighten us, and what can science tell us about what happens in our bodies when we're afraid? [The Anatomy of Fear (Infographic)]

Cultural influences can lead people to be fearful of certain things, such as black cats or killer clowns. But there are also universal triggers of fear, according to neuropsychiatrist Dr. Katherine Brownlowe, chief of the Division of Neurobehavioral Health at The Ohio State University Wexner Medical Center.

"Typically, those are things that are going to make you die," Brownlowe told Live Science.

[Everything You Wanted to Know About Halloween]

"Heights, animals, lightning, spiders, somebody running after you in a dark alley — generally, people have some kind of fear response to those kinds of things," she said.

Fear is, first and foremost, a survival mechanism. When the senses detect a source of stress that might pose a threat, the brain activates a cascade of reactions that prime us either to battle for our lives or to escape as quickly as possible — a reaction in mammals that is known as the "fight-or-flight" response.

Fear is regulated by a part of the brain within the temporal lobes known as the amygdala, Brownlowe told Live Science. When stress activates the amygdala, it temporarily overrides conscious thought so that the body can divert all of its energy to facing the threat — whatever that might be.

"The release of neurochemicals and hormones causes an increase in heart rate and breathing, shunts blood away from the intestines and sends more to the muscles, for running or fighting," Brownlowe explained. "It puts all the brain's attention into 'fight-or-flight.'"

Some of our bodies' responses to mortal terror are throwbacks to mechanisms that served our ancient ancestors, though these responses aren't as useful to us anymore. When fear raises goose bumps on our skin, it makes the hair on our arms stand up — which doesn't seem to help us either fight an enemy or escape from one. But when our early human ancestors were covered with hair, fluffing it up could have made them look bigger and more imposing, Brownlowe said.

Freezing in place like a deer caught in a car's headlights is another frequent response to being scared, and Brownlowe noted that this behavior is commonly seen in animals that are preyed upon.

The emotional response that we feel when we're afraid serves a purpose, as well — it heightens alertness, keeping the body and brain focused on staying safe until the threat is neutralized.

Even babies can be fearful of things such as loud noises, sudden movements and unfamiliar faces, and young children may be terrified of things that adults know aren't real — like a monster hiding under the bed or a boogeyman in the closet. It isn't until kids reach age 7 or so that they can differentiate between real-world threats and threats that live only in their imaginations, Brownlowe said. [Goblin Sharks and 'Skeletorus': 6 Scary Beasts to Haunt Your Halloween]

What makes humans' responses to fear different from other animals' is that people can process that fear and tamp it down once they consciously understand that they are not really in danger.

"We can get startled, but instead of running away like bunny rabbits, we reassess the situation and figure out that we don't need to respond in a 'fight-or-flight' manner," Brownlowe said. "And then we can just get on with our day."

Some people even deliberately seek out the experience of being frightened — they watch horror movies, brave the terrifying drop of towering roller coasters and do whatever generates a feeling of immediate personal risk. According to Brownlowe, they're enjoying the chemical aftermath that follows a rush of fear — a feeling that can be euphoric.

"Once the 'fight-or-flight' signals cease, the brain releases neurotransmitters and hormones that mediate what we call the 'rest-and-digest' system," Brownlowe said. "The heart rate is coming down, the breathing is slowing, goose bumps are relaxing. There's a sense of internal cognitive relief in the body, and that feels good."

The modern world comes with a number of stresses that early humans never faced and never could have imagined — financial burdens, performance anxieties, and a number of other social pressures that can generate fear and crushing anxiety. A good old-fashioned scare can make some of the everyday fears we face seem less terrifying, Brownlowe added.