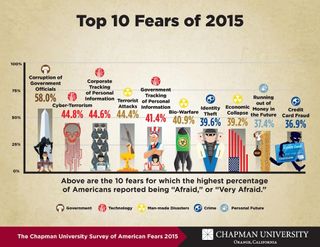 It's a spooky time of year in the United States — a time when jack-o'-lanterns glare from front porches and creepy masks cover the adorable faces of children. But these seasonal adornments don't tell the real story about what Americans fear most, according to a new survey.

Americans' biggest fears are related to government and technology, not ghosts and goblins, according to the Survey of American Fear by researchers at Chapman University in California. For the survey, the researchers polled a representative sample of approximately 1,500 Americans and found that the majority of Americans (58 percent) are either "afraid" or "very afraid" of the corruption of government officials. Cyberterrorism was also high on the list, with 44.8 percent of those surveyed saying they feared these kinds of attacks.

Fears related to the government and the malicious use of technology beat out what some people may view as much spookier stuff — things like biological warfare, being murdered or ghosts. (About half of all Americans hold some kind of belief in the paranormal, like ghosts, but these apparitions are not ranked highly on the list of fears.) [What Really Scares People: Top 10 Phobias]

"People tend to show higher levels of fear for things that they are both dependent upon and feel like they have no control over. And that fits with both the government and technology," said Christopher Bader, a professor of sociology at Chapman University and leader of the second annual Fear Survey.

The survey asked people questions related to "domains of fear." These are overarching themes that encompass a host of individual fears. For example, crime is a domain of fear that includes the fear of being murdered or raped, as well as the fear of being robbed or having one's identity stolen.

Included in the personal anxiety domain of fear are things like a fear of clowns and a fear of tight spaces. In total, the researchers identified 10 domains of fear that encompassed 88 individual fears and anxieties.

The survey found that, on average, the things that Americans fear most fall into three of the 10 domains of fear — fear of man-made disasters (terrorist attacks and economic collapse), technology (cyberterrorism and artificial intelligence) and government (corruption and gun control). The three domains of fear that Americans are least concerned about include judgment of others (personal appearance and weight), everyday life (talking to strangers and romantic rejection) and personal anxieties (public speaking and clowns). [Why Are People So Afraid of Sharks?]

"Our interest really lies not just in tracking peoples' fears over time but in tracking what these fears do," said Bader, who pointed out that peoples' fears can influence not only who they vote for but also whether or not they buy a gun or send their kids to private schools.

One of the most surprising trends that emerged from the survey, in Bader's opinion, was the relationship between fear and community engagement. The survey asked a lot of questions about how people behave in their neighborhoods — things like whether or not they talked to their neighbors, participated in civic organizations or took walks around the block after dark.

"We found very strong evidence that fear has both positive and negative effects on neighborhoods, which was surprising to us because, generally speaking, the research out there shows fear to be a uniformly negative phenomenon," Bader told Live Science.

But fear may have some positive effects on communities, according to Bader. When people are slightly afraid of crime in their neighborhood, they tend to get involved in the community by talking to neighbors, joining crime-watch groups and taking other measures, the researchers found. Yet, as fear about neighborhood crime grows, people tend to report lower levels of community engagement — spending more time indoors and reporting that they don't get to know neighbors or join in neighborhood groups.

"What criminologists have known for a long time is that, when people do start to retreat, it can become a self-fulfilling prophecy. To put it in simplistic terms, once the good people leave the streets, the bad people move in," Bader said.

This might seem rational. (You can't get swept away in a flood if you're in your attic, right?) But there's a problem with the relationship between Americans' fear of disasters and the action (or inaction) that this fear invokes, Bader said.

"The unfortunate and ironic thing is that the more afraid people are of disasters, the more they tend to become paralyzed and retreat," he said.

The survey found that 55 percent of Americans fear that they will be the victim of either a natural disaster or a man-made disaster. And more than three-quarters of Americans (86 percent) believe that having an emergency kit on hand would improve their chances of surviving such a disaster. Emergency kits, like those recommended by FEMA or the Red Cross, include basic supplies such as drinking water, canned food, medical items and a flashlight.

But despite the fact that so many Americans think having these kits is a good idea, very few Americans actually have them. Seventy-two percent of those surveyed said they'd made no effort to put an emergency kit together. Although disaster relief organizations continuously campaign to get Americans to stock up on necessary supplies in case of an emergency, these campaigns are largely unsuccessful, said Bader, who noted that the survey points to a simple reason why the campaigns fail.

"Fear-based campaigns don't work when it comes to promoting action," said Bader, who noted that campaigns that focus on the destruction wrought by disasters as a way to motivate people to prepare themselves actually have the opposite effect; they tend to make people feel even more afraid, which in turn keeps them from taking any kind of action.

Bader said that the survey could help inform future efforts that promote preparedness for natural and man-made disasters.

You can check out the full results of the Fear Survey on the Chapman University website.