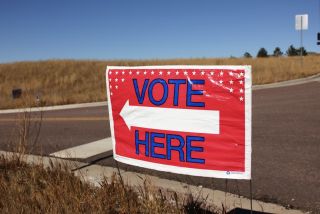 Climate change, defense spending, the economy: People may claim they base their political opinions solely on issues like these, but social scientists would beg to differ. Our voting habits are surprisingly irrational, and seemingly irrelevant factors can influence how, and whether, we vote.

While it's not surprising that family environment could shape your politics, it turns out that your voting preferences may be partly coded in your DNA. In a 2008 study in the journal American Political Science Review, researchers looked at identical and fraternal twins' voting patterns to see how much genetics shaped the siblings' votes. (Identical twins have the same DNA, while fraternal twins share just half of their DNA, so scientists can determine the role of genetics in a behavior by comparing it in identical versus fraternal twins) Researchers found that genes determined 53 percent of the twins' voting patterns.

Just like the flu, voting is contagious. If your Facebook friends "like" voting, chances are you will, too, according to a September study in the journal Nature. In that report, a single Facebook post urging people to vote reached 61 million people and mobilized 340,000 people to vote who otherwise wouldn't have. There was a catch, however: Get-out-the-vote reminders only motivated people to vote if they were posted along with photos of Facebook friends who had clicked an "I voted" button included in the reminder. The findings show how important social pressures are in affecting voting patterns, the researchers noted.

Those who are easily spooked are more likely to support conservative policies. In a 2008 study, researchers showed 46 volunteers images of maggot-infested wounds or bloody faces interspersed with photos of bunnies and smiling babies. Those who were more startled by the creepy images tended to support the Iraq War, warrantless wiretapping and the death penalty — policies generally considered more conservative. While it's not clear exactly why conservative politics and jumpiness go hand-in-hand, it could be that people who are more easily frightened gravitate toward policies they think will protect them.

Staying home on Election Day may be a matter of faith. People who believe God intervenes in everyday affairs are less likely to vote, according to a 2008 study in the journal Social Science Quarterly. In the study, Jews and white, mainline Protestants, who tend to believe in a more hands-off God, were more likely to vote than evangelicals, who tend to believe that God actively intervenes in world affairs. While faith in an active God reduces voting, people who pray over world concerns are 5 percent likelier to vote than their non-praying counterparts.

Feeling like a winner may also spur you to vote. A 2010 study published in the journal Proceedings of the National Academy of Sciences suggested that people who backed winning college basketball teams were more likely to vote for the incumbent in Senate, gubernatorial or presidential elections. Backing a winner may not only get people to the polls, it may also make them friskier: Google searches for pornography surged in states that backed the winning presidential candidate in 2004 and 2008. Seeing your candidate lose, however, could be a libido-killer: Men who voted for challenger John McCain in the 2008 election saw their testosterone levels dip when he lost, according to a study detailed in 2010 in the journal PLoS One.