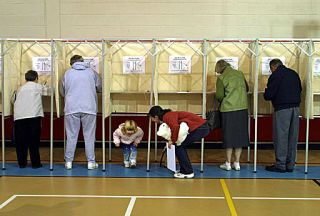 Voting could be in your genes, according to a study of twins.

The results, detailed in the May issue of the journal American Political Science Review, suggest that contrary to conventional wisdom, family upbringing has little or no effect on a child's future political involvement.   Political scientist James Fowler of UC San Diego and his colleagues analyzed voting patterns of identical and non-identical twins from a sample in Los Angeles County and the National Longitudinal Study of Adolescent Health.

Since identical twins come from the same egg, they have nearly identical DNA, while fraternal, or non-identical, twins are no more alike than any two siblings in terms of their genes.

The L.A. data included voter information for eight elections between 2000 and 2005, including three primary, two statewide and three general elections. Fifty-three percent of the differences in voter participation in LA statistically could be explained by genetics.

Similar results were found for the nationally representative adolescent health study conducted from 2001 to 2002. In addition, the genetic-based differences extended to various types of political participation, including donating to a campaign, contacting an official, running for office and attending a rally.

"We expected to find that genes played some role in political behavior," Fowler said, "but we were quite surprised by the size of the effect and how widely it applies to all kinds of participation."

Like most human behaviors, whether or not a person votes has been a tough nut to crack. Past research has attributed a series of factors, such as socioeconomic status and even personality types, as partly responsible for vote-or-not behaviors. Recently, religious beliefs were added to the list.

Next, Fowler's team hopes to figure out why genes are tied to voter turnout.

Funding for the research came from the Institute of Government Affairs at UC Davis.