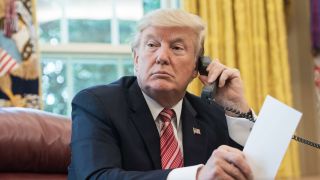 Impeachment means filing legal charges against an elected official. A whistleblower report in September 2019 alleged that Trump (shown here on the phone) asked the president of Ukraine during a phone call in July to look for damaging information on the son of Democratic presidential primary candidate Joe Biden.
(Image: © Nicolas Kamm/AFP/Getty)

Impeachment is the leveling of charges against an elected official by a legislative body. It's a fairly rare event in U.S. politics, particularly at the presidential level. But when impeachment proceedings do happen, they are guided by rules set out in the U.S. Constitution. And occasionally, they lead to elected officials losing their jobs.

Even so, impeachment doesn't on its own mean "removal from office," but rather it's the filing of a charge against an elected official.

Article II, Section IV of the Constitution states that "The President, Vice President and all civil Officers of the United States, shall be removed from Office on Impeachment for, and Conviction of, Treason, Bribery and other high Crimes and Misdemeanors." The U.S. House of Representatives is responsible for impeachments, while the U.S. Senate's job is to try all impeachments while the Chief Justice of the Supreme Court presides.

According to the U.S. House of Representatives archives, impeachment proceedings have been opened more than 60 times in U.S. history, but only eight cases have led to the Senate removing the impeached officials. (All eight were U.S. judges.) Two presidents, Andrew Johnson and William Jefferson Clinton, have been impeached by the House, but neither was removed from office by the Senate. On Sept. 24, 2019, House Speaker Nancy Pelosi announced the beginning of a formal impeachment inquiry into President Donald Trump, the first step in the impeachment process.

Here's what that means.

Who can start the impeachment process?

The House of Representatives is charged with the sole power of impeachment by Article I, Section 2 of the U.S. Constitution. This means that any House member may introduce articles of impeachment as they would a regular bill, or that the legislative body may vote to launch an impeachment inquiry, or an official investigation of the elected individual. From this inquiry — typically carried out by the relevant subcommittees of the House — would emerge the charges, or articles of impeachment, for the House of Representatives to vote on.

What are the legal reasons for impeachment?

Article II, Section 4 of the Constitution lays out the reasons for impeachment: "The President, Vice President and all civil Officers of the United States, shall be removed from Office on Impeachment for, and Conviction of, Treason, Bribery, or other high Crimes and Misdemeanors."

According to the House of Representatives, the "high Crimes and Misdemeanors" language came from Founding Father George Mason of Virginia, who drew it from a British legal term referring to crimes by public officials against the government. This rather vague terminology has led to an ongoing debate over what misconduct qualifies as impeachable, according to Cornell Law School's Legal Information Institute.The term does not necessarily require the elected official to break a specific law, but rather to break public trust, Jeffrey A. Engel, a presidential historian at Southern Methodist University and co-author of the book "Impeachment: An American History" (Modern Library, 2018), told Politifact in May 2019. This interpretation is backed up by Alexander Hamilton's Federalist Paper 65, which referred to impeachable offenses as those "which proceed from the misconduct of public men, or, in other words, from the abuse or violation of some public trust."

The House can get the impeachment ball rolling in one of two ways. First, any member of the legislative body may introduce impeachment just as he or she would a regular bill. This process had been tentatively underway in the House before the announcement of a formal inquiry regarding Trump in September. In August, House Judiciary Committee Chairman Rep. Jerry Nadler (D-NY) told CNN that his committee was investigating allegations that Trump obstructed justice during the Robert Mueller investigation into Trump's ties with Russia during the 2016 presidential election. In that interview, Nadler said he and his committee would decide whether to introduce articles of impeachment onto the House floor by the end of 2019, Politico reported.

However, a whistleblower report in September alleged that Trump asked the president of Ukraine during a phone call in July to look for damaging information on Hunter Biden, the son of Democratic presidential primary candidate Joe Biden who once sat on the board of a Ukrainian gas company, according to the Associated Press. The allegations that the president had asked a foreign power for help winning a federal election prompted Pelosi to declare a formal impeachment inquiry.

Related: The 6 Strangest Presidential Elections in US History

Impeachment can also begin with a bill to authorize an inquiry. The House has passed such a bill in previous presidential impeachments.

If the House ultimately votes to bring impeachment charges, those charges will then be handed over to the Senate for an impeachment trial. Chief Justice John Roberts would preside over this trial. Only if two-thirds of the Senate votes to convict would the president be removed from office.

Who has been impeached?

According to the U.S. House archives, 15 federal judges have been impeached by the House, along with one cabinet secretary, one U.S. Senator and two presidents. In addition, U.S.President Richard Nixon resigned in 1974 ahead of a vote in the House that almost certainly would have impeached him over his role in the Watergate scandal, a break-in at the headquarters of the Democratic National Committee.

The first impeachment trial ever was that of U.S. Senator William Blount from Tennessee, in 1798. According to a U.S. Senate history, Blount tried to resolve some financial difficulties by concocting a scheme to have a force of Native Americans and white settlers attack Florida and Louisiana, then Spanish colonies, and turn them over to Great Britain. The Senate expelled Blount for this corruption in 1797 (which can be done without impeachment, by a two-thirds vote of the body) and then went on to formally impeach him the next year.

Related: Past Presidents: What Made Them Great?

William Belknap, the Secretary of War under President Ulysses S. Grant, was impeached by the House in 1876 over a kickback scandal at Fort Sill on the western frontier. Belknap resigned before being tried by the Senate, which nonetheless held the trial. The Senate found Belknap guilty with a vote of 35 to 25, failing to reach the crucial two-thirds majority needed for a conviction.

The highest-profile impeachment cases, naturally, have been presidential. In 1868, Andrew Johnson would become the first U.S. president to be impeached by the House of Representatives. Johnson, a Democrat, had been actively blocking attempts by the House's Radical Republicans — a faction of the Republican party that pushed to eradicate slavery — to bestow rights on freed slaves and to prosecute former Confederate leadership, according to a U.S. Senate history. When Johnson fired his Secretary of War over opposition from Congress, which approves cabinet positions, the House brought 11 articles of impeachment (or sets of charges) against the president. The Senate fell one vote short of the two-thirds majority needed to convict, allowing Johnson to serve out his term.

The second presidential impeachment also ended with a failure to convict in the Senate. In 1998, 130 years after Johnson's impeachment, the House of Representatives brought articles of impeachment against Democratic President Bill Clinton, charging that the president had lied to a grand jury and obstructed justice in the investigation surrounding his relationship with White House intern Monica Lewinsky. The Senate failed to convict Clinton of either perjury or obstruction of justice, and he finished out his term.