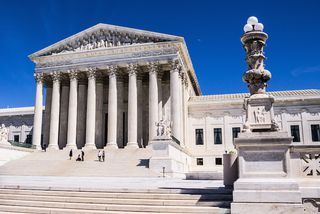 Supreme Court justice Anthony Kenneday said he's retiring at the end of July, meaning the court will hold just eight justices until a new nominee gets confirmed by the U.S. Senate.

Eight justices also manned the court between February 2016 when Justice Antonin Scalia died and Neil Gorsuch was confirmed on April 7, 2017.

However, it turns out, the original U.S. Constitution did not set the number of justices on the Supreme Court. Therefore, it was up to Congress to decide, and in 1801, it set the number at five. But things didn't stay that way for long.

Then, in order to prevent President Andrew Johnson, who was soon to be impeached, from naming any new Supreme Court justices, Congress passed the Judicial Circuits Act of 1866. This Act reduced the number from 10 to seven. The decrease was to take effect as the seats became vacant.

However, only two seats were freed up by 1869, so there were eight justices. Congress added one seat back in and decided that there should be nine justices. The Judiciary Act of 1869 officially set the number, and it has not budged since.

The current justices on the court are:

"There are no official qualifications to become a justice, although most justices have a background in the law," Arberg said. "When there is a vacancy on the Supreme Court, the president nominates someone who then has to be approved by a majority vote in the Senate."