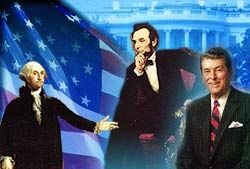 Who would make a better president — a man with more than 30 years of experience in Congress or one with about six?

If you chose the latter, congratulations: You've elected James Buchanan, one of the least popular presidents in U.S. history, over Franklin D. Roosevelt.

Fan-favorite Abraham Lincoln also had little political experience before running for president, failing both as a businessman and a farmer, but George Washington had plenty.

So what kind of qualifications make for a successful POTUS, or president of the United States?

Candidates certainly bring different backgrounds to the table. Pundits may have their say and analysts can crunch their numbers to forecast a winner, but history may be just as interesting (and maybe as accurate) as a presidential prognosticator.

There's no clear pattern, as it turns out, among the 43 men who eventually became president (Grover Cleveland was both our 22nd and 24th). Each took a unique path to the Oval Office. Educated guess

For starters, George Washington never went to college. In his defense, schools of higher education were in short supply in early 18th-century America.

Eight other presidents besides Washington didn't get an undergraduate degree, including relatively "modern" prez Harry Truman. Thirty-four others did go on to college or beyond, yielding a Rhodes Scholar (Bill Clinton) and a Ph.D. in political science (Woodrow Wilson) among them.

Harvard was the school of choice for the most past presidents, with eight POTUS alumni, followed closely by Yale, with five.

There is a long tradition of presidents who served in the military, ranging from a stint in the National Guard (current President George W. Bush) to five-star Generals (Washington, Grant and Eisenhower). With the exception of Bill Clinton and Barack Obama, every U.S. president since Franklin D. Roosevelt served in some capacity.

Other qualifications Objective: dynamic self-starter seeks position as leader of the free world. If an executive branch HR department kept partial stats on the job experience section of presidents' pre-election resumes, they would something read like this:

Between their out-of-Washington day jobs and the White House, most did, of course, spend some time signing documents in a state legislature or Congress. The nature or length of their tenure did not seem to affect their popularity, however.

Out of the 16 two-term (or more, in the case of FDR) leaders, 10 of those never served in the Senate or the House of Representatives, long considered the engine of U.S. law and government.

Vice president was also a popular gig to hold before becoming president, with 14 of our past commanders in chief holding the veep post before going on to the big show.

Some vice presidents ran for president and won and a few took over when a sitting president was assassinated or died in office. Gerald Ford has the dubious distinction of being the only president never to be elected by U.S. voters. Instead, he was appointed vice president by Richard Nixon in 1973 when Spiro Agnew stepped down, and then became president when Nixon resigned in 1974.

At 47, Obama wasn't the youngest person ever elected president, but close. Only JFK, elected at 43, Clinton (45), Grant (46) and Teddy Roosevelt, who ascended the office at 42 after the assassination of McKinley, were younger.