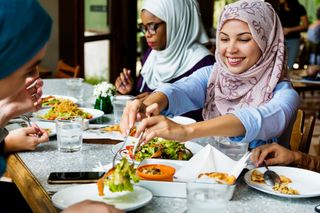 The vagus nerve is responsible for carrying signals between the brain and the rest of the body, and plays a key role in appetite and digestion.
(Image: © Shutterstock)

The vagus nerve serves as the body's superhighway, carrying information between the brain and the internal organs and controlling the body's response in times of rest and relaxation. The large nerve originates in the brain and branches out in multiple directions to the neck and torso, where it's responsible for actions such as carrying sensory information from the skin of the ear, controlling the muscles that you use to swallow and speak and influencing your immune system.

The vagus is the 10th of 12 cranial nerves that extend directly from the brain, according to the Encyclopedia Britannica. Although we refer to the vagus nerve as singular, it's actually a pair of nerves that emerge from the left and right side of the medulla oblongata portion of the brain stem. The nerve gets its name from the Latin word for wandering, according to Merriam-Webster, which is appropriate, as the vagus nerve is the largest and most widely branching cranial nerve.

By wandering and branching throughout the body, the vagus nerve provides the primary control for the nervous system's parasympathetic division: the rest-and-digest counterpoint to the sympathetic nervous system's fight-or-flight response. When the body is not under stress, the vagus nerve sends commands that slow heart and breathing rates and increase digestion. In times of stress, control shifts to the sympathetic system, which produces the opposite effect.

The vagus nerve also carries sensory signals from internal organs back to the brain, enabling the brain to keep track of the organs' actions.

The remaining 80% to 90% of the neurons carry sensory information from the stomach and intestines to the brain. This communication line between the brain and the gastrointestinal tract is called the brain-gut axis, and it keeps the brain informed about the status of muscle contraction, the speed of food passage through the gut and feelings of hunger or satiety. A 2017 study published in the Journal of Internal Medicine found that the vagus nerve is so closely entwined with the digestive system that stimulation of the nerve can improve irritable bowel syndrome.

In recent decades, many researchers have found that this brain-gut axis has another counterpart — the bacteria that live inside the intestines. This microbiome communicates with the brain through the vagus nerve, affecting not just food intake but also mood and inflammation response, according to a 2014 review published in the journal Advances in Experimental Medicine and Biology. Much of the existing research involves experiments with mice and rats rather than humans. Nonetheless, the results are striking and show that changes in the microbiome may cause changes in the brain.

Stimulation of the vagus nerve has been effective in treating cases of epilepsy that do not respond to medication. Surgeons place an electrode around the right branch of the vagus nerve in the neck, with a battery implanted below the collarbone. The electrode provides regular stimulation to the nerve, which decreases, or in rare cases prevents, the excessive brain activity that causes seizures, according to the Epilepsy Foundation.  Europe has approved a vagus nerve stimulator that does not require surgical implantation, according to the Mayo Clinic.

More recently, researchers have been investigating the vagus nerve’s role in treating chronic inflammatory disorders such as sepsis, lung injury, rheumatoid arthritis (RA) and diabetes, according to a 2018 review in the Journal of Inflammation Research. Because the vagus nerve influences the immune system, damage to the nerve may have a role in autoimmune and other disorders.

Damage to the vagus nerve

Scientists have long known that chronic conditions such as alcoholism and diabetes can damage nerves, including the vagus nerve, although why this damage happens is not well understood. People with insulin-dependent diabetes may develop neuropathy in many nerves. If the vagus nerve is damaged, nausea, bloating, diarrhea and gastroparesis (in which the stomach empties too slowly) may result. Unfortunately, diabetic neuropathy cannot be reversed, according to the Mayo Clinic.

If the vagus nerve becomes damaged by physical trauma or the growth of a tumor, it may cause digestive symptoms, or hoarseness, paralysis of the vocal cords and slowed heart rate. There have been several cases of people whose vagus nerve damage was small enough that the nerve was able to regenerate after removal of a tumor, including a 2011 case detailed in the journal Neurology.

The vagus nerve and fainting

When someone faints from heat exposure, standing for a long time or from something surprising such as the sight of blood, the vagus nerve is partly to blame. This occurrence, called vasovagal syncope, happens when the sympathetic division dilates blood vessels in the legs and the vagus nerve overreacts, causing a significant and immediate decrease in heart rate. Blood pools in the legs, blood pressure drops, and without enough blood flow to the brain, the person loses consciousness momentarily. Unless a person faints frequently, vasovagal syncope does not require treatment.