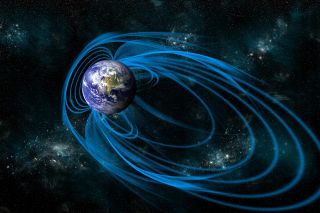 A magnetic field surrounds our planet and protects it from solar radiation. Our brains might be able to tune into it.
(Image: © Shutterstock)

For some creatures, the magnetic field that hugs our planet serves as a compass for navigation or orientation.

Migratory birds, sea turtles and certain types of bacteria are counted among the species with this built-in navigation system. But what about humans? According to a new study, humans can also sense Earth's magnetic field.

The new study, published today (March 18) in the journal eNeuro, provides the first direct evidence, from brain scans, that humans can do so, likely through magnetic particles scattered around the brain.

The ability to detect the magnetic field, called magnetoreception, was first suggested to exist in humans back in the 1980s. But subsequent studies of the brain, from the 1990s, didn't find evidence of the ability. [Top 10 Mysteries of the Mind]

But with access to new data analysis techniques, an international group of researchers decided to take another look.

To study whether humans can sense the magnetic field, 34 adults were asked to sit in a dark test chamber adorned with large, square coils. Electric currents traveled through these coils, changing the magnetic field in the chamber..

The intensity of this magnetic field was about the same as the one that surrounds our planet, said lead study author Connie Wang, a doctoral student at the California Institute of Technology. For comparison, it's about 100,000 times weaker than the ones created by MRI machines, Wang noted.

The participants were told to relax and close their eyes while the researchers manipulated the magnetic field around them. During the experiment, electroencephalogram (EEG) machines measured a type of brainwave called an alpha wave. Alpha waves are known to decrease in amplitude when the brain picks up a signal, whether it be sight, sound … or something magnetic.

Of the 34 participants, brain scans from four individuals showed strong reactions to one change in the magnetic field: a shift from northeast to northwest. This shift would be the same as a person outside the chamber shifting their head quickly from left to right, except the head moves through the static magnetic field rather than the field moving around it. [Earth Quiz: Do You Really Know Your Planet?]

In the four individuals, alpha brain waves decreased in amplitude by as much as 60 percent. But they responded only when the field shifted from northeast to northwest — not in the other direction.

"We weren't really expecting an asymmetrical response," Wang told Live Science. Though it’s unclear why this happened, the researchers think it could be something unique to individuals, just like how some people are right-handed and some left-handed.

Several participants also had a strong response to another set of experiments that shifted the incline of the field, which is what would happen if you traveled between the Northern and Southern hemispheres.

To ensure the results weren't a fluke, the study responders were re-tested several weeks later — and the results held true. Stuart Gilder, a professor of geophysics at the Ludwig-Maximilian University of Munich who was not part of the new study, said that the repeated findings made the study convincing.

Still, the study does raise some additional questions, he noted. For example, how would people perceive the field if they had been lying down, or the magnetic field had been moving slower?

It's unclear why some humans seem to be capable of magnetoreception, but in theory, the skill could help with orientation, or be a remnant of an ability that evolved early on to help creatures — even ancient hunter-gatherers — navigate. "Many animals use the Earth's magnetic field for navigation," Wang told Live Science. "There's such a wide range of creatures that have this sense that we think humans, at least, have some remnants of this sense, even if we don't use it so much in our daily lives anymore."

And many questions remain about magnetoreception in general, like how it works. Indeed, scientists have figured out how magnetoreception works in just one type of creature: a type of bacteria called magnetotactic bacteria. These microbes migrate along the field lines of our planet's magnetic field using magnetic particles called magnetite (Fe3O4).

These magnetite particles have been known to exist in the human brain for decades — and were first found by Joseph Kirschvink, a professor of geobiology at Caltech, who is the senior author of the new study.

What’s more, a study published in August 2018 in the journal Scientific Reports from Gilder's group found that these magnetic particles were scattered throughout the human brain. Their widespread presence in the brain suggested that the particles likely served some kind of biological purpose, the authors of that study concluded.

Editor's Note: This article was updated on March 19 to clarify that magnetic particles aren't confined to a "brain" in microbes. Bacteria are typically made up of single cells and so they do not have brains.