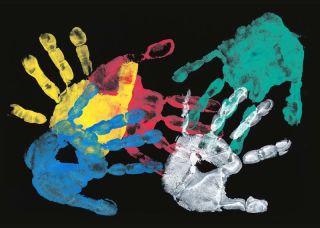 Whether you're a righty or lefty may say more about you than what hand you use to write or play sports.
(Image: © Igor Kovalchuk | Shutterstock)

To get a sense of human handedness, take a survey of those combination chair-desk furniture pieces in classrooms. The desktops tend to wrap around from the right. That's so right-handers can comfortably rest their arms while jotting down notes with their dominant hand. For that uncommon left-hander, if he or she is lucky, there might be an odd-looking desk or two with an oppositely molded desktop.

Such classroom chauvinism reflects the puzzlingly strong bias toward right-hand dominance in our species. All over the planet, nine out of 10 people, on average, favor their right hand for writing, throwing and so on. ("Footedness" roughly follows this same breakdown, though for sensory organs, such as eyes and ears, preference is less skewed; true ambidexterity occurs in less than 1 percent of the population.)

Despite more than a century and a half of research, scientists have yet to find an answer for what causes handedness. "It's a very good question but we don't know," said David P. Carey, a neuropsychologist at Bangor University in the U.K.

Clues relating to asymmetries in our bodies, and especially in the brain, however, could help explain the paucity of "south paws."

To the left, to the right

The selection of one hand for fine motor control might reflect the fact that much of our anatomy and function is not balanced.

Our internal organs do not mirror the body's exterior, bilateral symmetry — that pattern of two opposing legs, hands, nipples, eyes, ears and so on. The heart and spleen, for example, normally form on the body's left side, the liver on the right; each lung bears a distinctly different shape.

And so it goes with our brain. That wrinkly pulp in our skulls divides down the middle into two hemispheres and, in a quirk of evolution, each hemisphere controls the opposite side of the body; that is, the brain's left hemisphere operates our right side, and vice versa. The same process occurs with vision — what our left eye "sees" is processed by the right rear of the brain. [10 Things You Didn't Know About the Brain]

Although the two halves of our brain have broadly similar anatomy, certain tasks tend to be handled by one side of the brain more than the other. Scientists chalk this up to efficiency's sake, as performing duplicate, simultaneous actions on each side wastes energy and available brain power.

"For a lot of actions, it's a good idea to have the boss living in one place," Carey said.

That phenomenon of brain laterality and division of labor could help explain handedness. Among the more demanding and recently evolved tasks for our brain is language processing and generation. Intriguingly, in 90 percent to 95 percent of right-handers, the left hemisphere is dominant for language and speech functions, suggesting evolution has honed one side to handle skillful work.

"If I have one part of my brain controlling my fine motor movements, it would make sense to have this part handle language, too," Carey told LiveScience.

Yet the relationship is not so simple. About two-thirds of lefties are also left-hemisphere dominant for speech and language, Carey said, and some 5 percent or more of righties have right-hemisphere dominance. [Constant Battle as Brain Pits Right Hand Against Left]

Delving into genetics has not yet explained away the extreme bias toward human right-handedness either, though hints of inheritance emerge. The chance of two left-handed parents having left-handed offspring, for instance, is around 25 percent, compared with 10 percent in the general population. A gene discovered in 2007, called LRRTM1, shows up more in lefties as well.

Researchers have also looked to other animals to help them solve the human riddle of handedness. Many mammals, including our closest living relatives the chimpanzees, bonobos and gorillas, exhibit a preferred hand. So, too, do dogs.

"Your dog is one-pawed," said Carey. "If you force a dog to reach for a toy through an aperture, it will tend over many trials to use one paw over the other."

But this breakdown for left versus right in Fido as well as Coco is about 50-50, eschewing humans' overwhelmingly right-sided population-handedness. That even-handed, if you will, split extends to non-mammals such as fiddler crabs, whose enlarged claw for fighting develops on either side in equal measure.

Whatever handedness' origin in humankind, it's clearly been around a long time. For example, cave paintings have shown the occasional lefty ancestor clutching a spear.

The relative scarcity of left-handedness, as with many "otherisms" in human history, has provoked cultural superstition and discrimination. Even just several decades ago in the U.S., parents and teachers still snatched pencils out of children's left hands and tried making lefties write like a righty.

The ancient prejudice against lefties remains embedded in the English language. "Sinister" shares a Latin root with "sinistral," meaning "in regards to the left side," and "left" derives from the Anglo-Saxon word for "weak."

On the other hand, some evidence points to lefties possessing on average more intelligence or artistic giftedness than righties, perhaps given their alternative brains. Interestingly, four out of the last seven presidents have been left-handers, including Barack Obama, Bill Clinton, George H.W. Bush and Gerald Ford.

Living as a lefty

Overall, handedness ­— inasmuch as it offers insight into an individual's cerebral and bodily abilities, tendencies and deficits — is just one of many elements in a complicated picture.

"There is not a one-to-one correlation. …. It is not as if you are left-handed [so] you will become brilliant or get a disease," said Amar Klar, a geneticist at the National Cancer Institute's Center for Cancer Research in Frederick, Md.

Although the stigma against left-handedness has largely lifted around the world, Carey pointed out that righties still have it easier.