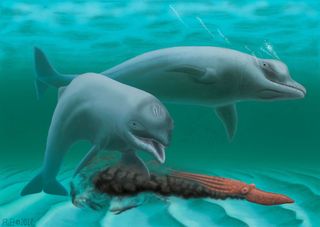 A now-extinct dwarf dolphin whose name means "weaponless-snouted strange face" may have once used its toothless mouth to suck up fish and squid, a new study finds.

The finding suggests that modern dolphinsand whales developed bizarre forms of feeding within only a few million years after they evolved, the researchers said.

Divers hunting for shark teeth found the skull fossil of a dolphin at the bottom of the Wando River near Charleston, South Carolina. Based on the layers of sandy limestone in which the bone was discovered, the scientists determined that the fossil is about 28 million to 30 million years old. [Deep Divers: A Gallery of Dolphins]

The size of the fossil suggests that this extinct dolphin was a dwarf species. It may have measured up to about 4 feet (1.2 meters) long and weighed 100 lbs. (45 kilograms), said study lead author Robert Boessenecker, a vertebrate paleontologist at the College of Charleston in South Carolina.

Back when this dwarf dolphin lived, it shared the sea with scallops, barnacles and coral, as well as sharks, bony-toothed birds, swordfish that reached up to about 30 feet (9 m) long, and a wide variety of whales and dolphins, "including giant predatory 'shark-toothed dolphins,'" Boessenecker said. This newfound species "would have been an easy target" for many of these sharks, dolphins and whales, he added.

The dwarf dolphin's name refers to its short, toothless snout. It has the shortest jawbone of any known living or extinct cetacean, the group that includes dolphins and whales, the researchers said.

The scientists suggested that I. xenops likely adapted to feed via suction, just as many other suction-feeding cetaceans, such as tusked narwhals, did. "Inermorostrum must have fed on predominantly soft-bodied prey items," Boessenecker said. "Perhaps fish small enough to swallow, as well as soft-bodied invertebrates — squid, octopus, sea cucumbers. These sorts of critters would have been easily suctioned up off the seabed."

Enlarged holes in the snout of the skull suggest that this dwarf dolphin may have had large, fleshy lips, or perhaps whiskers. These features may have helped it root for food in the seafloor, the researchers said.

I. xenopsis the sixth known example of toothlessness in cetaceans and only the 11th known case of toothlessness in mammals, the researchers said. The fact that such a specialized form of feeding originated early in cetacean evolution suggests that "dolphins have a long history of being adaptable and experimenting with new behaviors," Boessenecker said.

In the future, Boessenecker will analyze other whale and dolphin fossils from South Carolina. "Many more strange and fantastical species await naming and illumination," he said.

The scientists detailed their findings online Aug. 23 in the journal Proceedings of the Royal Society B.