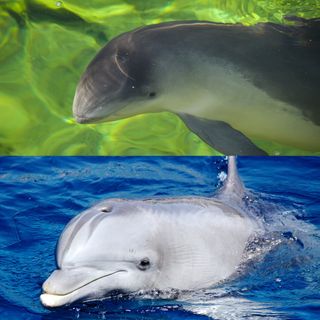 Dolphins have more elongated "beaks" than porpoises. Can you guess which is which here?
(Image: © Jan Zoetekouw (top); Gervasio S. _ Eureka_89 (bottom)/Shutterstock.com)

Sitting in your comfy beach chair watching the waves roll in, you spot a dolphin leaping from the water. But wait, is that really a dolphin or are you watching a porpoise's graceful antics?

Turns out, though both names refer to air-breathing, warm-blooded marine mammals, dolphins and porpoises are different species, and even belong to separate genuses (groups of similar species).

If you want to become an expert at telling the difference the next time you spot one in the ocean, first look at the animal's grin … if you can make it out. While dolphins have elongated "mouths" or "beaks," porpoises have shorter, smaller grins, according to the National Oceanic and Atmospheric Administration (NOAA). And if you ever get a chance to see their teeth, dolphins sport a set of cone-shaped chompers, while porpoises' teeth are spade-shaped, according to NOAA.

The dorsal fin, the one in the middle of the back, may be a key differentiator of the marine mammals, at least for sunbathers who may catch just a glimpse of the animal. Dolphins have a curved, or hooked, fin, while porpoises are equipped with a triangular one, NOAA says. "Generally speaking, dolphin bodies are leaner, and porpoises' are portly," according to NOAA. [Deep Divers: A Gallery of Dolphins]

And dolphins take home the prize for the more gregarious of the cetacean groups. The animals talk to each other underwater by making whistling sounds through their blowholes; scientists don't think porpoises make these whistles, according to NOAA.

There are six porpoise species, according to research published in 1995 in the journal Molecular Phylogenetics and Evolution:

And dolphins are grouped into 32 different species, according to NOAA.

Regardless of their slightly different looks, dolphins and porpoises are both considered brainy creatures and they both have a melon, a structure in the forehead that they use to produce sound waves for navigating their watery homes.