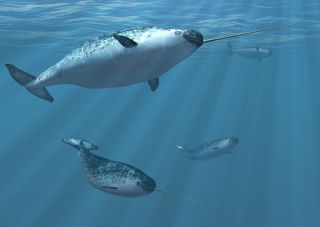 Wild narwhals using their tusks to hunt fish, hitting and stunning the prey to make the fish easier to consume.
(Image: © Linda Bucklin/Shutterstock)

Narwhals are sometimes known as the "unicorns" of the ocean because of the long "tusks" that protrude from the animals' heads, but scientists have long been stumped about the function of this mysterious appendage — until now.

Drone footage of wild narwhals has revealed that the whales use their tusks to hunt fish. The tusk is actually a tooth that spirals out of the upper jaw on male narwhals, and can extend to about 10 feet (3 meters) long, according to the World Wildlife Fund (WWF) Canada. While scientists think the tusk's primary function relates to selecting a mate, these new observations show narwhals have another use for the tusks.

Researchers from WWF-Canada worked with a team of scientists from multiple organizations to capture this first-of-its kind footage, which was part of a pilot project to use unmanned aerial vehicles (UAVs or drones) to study narwhal behavior in Tremblay Sound in Nunavut, Canada. [Whale Album: Giants of the Deep]

The drone-enabled observations provide the first conclusive scientific evidence of the narwhal using its tusk, WWF-Canada officials said in a statement.

"This footage, while also stunning to watch, will play a significant role in the future of narwhal conservation," David Miller, president and CEO of WWF-Canada, said in the statement. "As the Arctic warms and development pressure increases, it will be important to understand how narwhal are using their habitat during their annual migration. With this information in hand, we can work to minimize the effects of human activities on narwhal."

Previous research on the narwhal tusk found that the animals also use this tooth to help "see" via echolocation. Without a hard enamel to protect it, the tooth is highly sensitive and gives narwhals "an evolutionary advantage" over other echolocating species, scientists reported in a 2016 study published in the journal PLOS One.

Though scientific research on the whale has advanced, and there is a wealth of traditional Inuit knowledge about the species, the narwhal is still difficult to study, because the animals live in a challenging environment, said Nigel Hussey, a researcher at the University of Windsor in Canada. Drones could help with this, added Hussey, who was involved in the recent observations.