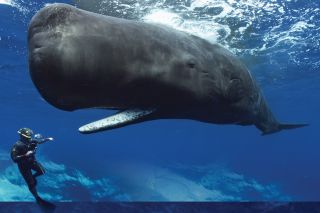 The male sperm whale (Physeter macrocephalus) is the largest living toothed predator on Earth. Its submarine-like shape is perfectly adapted for deep diving — it can swim down to at least 6,500 feet to feed. The whale’s massive bulbous head is about one-third of the animal’s length. It’s also a massive sound generator that helps the whale navigate.
(Image: © © Brandon Cole)

NEW YORK — By moving into the water full-time, the ancestors of whales paved the way for their descendants to become behemoths, largely free from gravity's constraints. Today, the blue whale is the largest animal ever to live.

But even before the move, this lineage was setting size records. One ancient cousin to modern whales and hippos, called Andrewsarchus mongoliensis, ranks as the largest mammal known to have stalked the land as a predator. A skull from this creature — the only fossil found so far from this beast — greets visitors on their way into a new exhibit on whales here at the American Museum of Natural History.

"It's odd to have a big predator in this hoofed plant-eating mammal group," said John Flynn, co-curator of the exhibit, referring to the group to which whales and the now-extinct Andrewsarchus belonged. "But if you think about it, some of the other relatives like pigs and peccaries are pretty ferocious and will eat just about anything."

In an artist's rendering, the 45-million-year-old Andrewsarchus has a profile not unlike a giant feral pig with a more streamlined snout. This 6-foot-tall (1.8 meters) creature lived solely on land, but its relatives began taking to the water and eventually left land completely. [Whale Gallery: Giants of the Deep]

The "first whale," a creature whose lifestyle (living on land but eating fish from the nearby sea) represented the early stage of this transition into the water, was a wolf-size fish eater that lived about 50 million years ago on the edges of the ancient Tethys Sea, according to the exhibit. Whereas this creature had a body clearly adapted for land, its relatives began acquiring features better suited to life in the water, such as webbed feet and a more streamlined, hairless shape.

The basilosaurids, which lived about 34 million to 40 million years ago, had a more familiar shape than their ancestors. Basilosaurids had nostrils situated toward the top of their heads, an ear structure that suggested they could hear well underwater, and forelimbs that took the shape of paddlelike flippers.

Their hips and legs were on the way out. A basilosaurid on display, Dorudon atrox, displays a tiny pelvis and legs detached from its spinal column.  [Top 10 Useless Limbs]

These leftovers from land are still visible in some modern whales. For instance, the skeleton of a pygmy right whale hanging from the ceiling displayed two tiny bones, the remnant of the pelvis, Flynn pointed out.

"Imagine your hip bones just started to float off your body — that is what that is," he said.

Nowadays, there are two varieties of whale. These are the baleen whales, such as the blue whale, which use plates of baleen, made from fingernail-like material, to filter food from the water, and toothed whales, such as dolphins, killer whales and narwhals, which kept their teeth. (In the case of narwhals, one tooth becomes a modified tusk.)

Around 30 million years ago, these lineages split and evolved into the more than 80 species living today.

The exhibit also explores whale biology, and includes a life-size replica of a blue whale heart. Whales' relationships with humans are also a focus. The exhibit addresses the whaling industry, modern dangers, such as ship collisions, as well as coastal peoples' interactions with them.

Formally known as "Whales: Giants of the Deep," this exhibition traveled to New York from New Zealand, where it was developed by the Museum of New Zealand Te Papa Tongarewa. (It was modified by the American Museum of Natural History.) In traditional Maori culture, whales were the source of important resources, such as oil, protein, bones and teeth, and the inspiration for stories of whale riders, ancestors transported to New Zealand atop a whale.

A preview of the exhibit opened with a Maori blessing intended to invoke the gods, the spirits of ancestors and spirits of the whales on display.