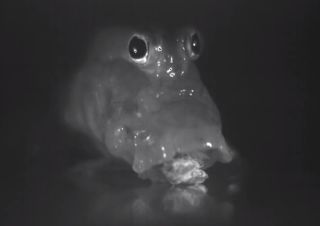 A fish that uses water as a sort of tongue to feed on land could shed light on how animals with backbones first invaded land, researchers say.

One of the most pivotal moments in evolution occurred when a few pioneering fish left the waterabout 350 million to 400 million years ago. These fish evolved into the first tetrapods (four-legged land animals), which ultimately gave rise to amphibians, reptiles, birds and mammals.

To figure out how ancient animals made this shift to land, scientists typically investigate how the limbs of the first tetrapods evolved over time. However, biomechanistKrijn Michel at the University of Antwerp in Belgium and his colleagues suggest that investigating how early tetrapods learned to eat on land is equally important to understanding this key point in evolution.

In the water, fish generate suction with their mouths to help draw in food with the help of a neck bone known as the hyoid. On land, sucking in air to swallow food proved impractical, so tetrapods instead evolved tongues supported by the hyoid that help guide food down their throats. However, much remains unknown about how tetrapod hyoids and tongues evolved. [See Video of Mudskipper Eating With 'Water Tongue']

Now, Michel and his colleagues have found that mudskippers use their mouthfuls of water "like a tongue to capture and swallow food on land, a finding that may give us a glimpse into how the very first land vertebrates evolved from fish 400 million to 350 million years ago," Michel told Live Science.

The researchers experimented with five mudskippers from Nigeria, using high-speed video cameras and X-ray scanners to record the fish feeding on shrimp.

Results showed that the mudskippers fed by first exuding water from their mouths and then quickly sucking it back up once it submerged the food. Essentially, the water acted like a tongue.

When using this "hydrodynamic tongue," the mudskippers moved their hyoids upward, "more or less the opposite of what fish do to feed underwater," Michel said. However, the mudskipper hyoids behaved much like how those of primitive tetrapods such as newts do during feeding.

The researchers suggest that early tetrapods may have used hydrodynamic tongues when first moving onto land, and evolved fleshy tongues later to gain further independence from the water.

Michel and his colleaguesdetailed their findings online March 18 in the journal Proceedings of the Royal Society B.