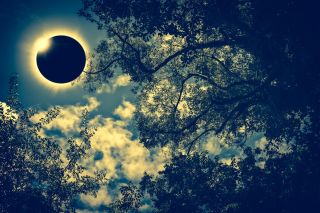 Want to experience the Great American Solar Eclipse in a wildlife refuge? There are plenty of these refuges along the path of totality.
(Image: © kdshutterman/Shutterstock)

If you're heading to a region in the direct path of the total solar eclipse on Monday (Aug. 21), you may want to check out the national wildlife refuges there.

These refuges, run by the U.S. Fish and Wildlife Service, could be prime viewing spots for nature lovers.

Because the total eclipse will creep across the U.S. from Oregon to South Carolina, along a 70-mile-wide (113 kilometers) path, those located within that swath in the Pacific Northwest will get the first glimpses of the blotted-out solar disk. [2017 Total Solar Eclipse: Everything You Need to Know]

And one in Idaho: Camas National Wildlife Refuge.

To accommodate eclipse viewers, each Pacific Northwest refuge will designate special parking and observing areas. In addition, parts of these refuges may be closed during the eclipse to protect threatened and endangered flora and fauna, according to the National Wildlife Refuge System (NWRS). "Please respect these limits," NWRS said. Also, the refuges are open from dawn through dusk, but overnight parking and camping aren't permitted.

Two Oregon coast refuges, Siletz Bay and Nestucca Bay, will allow no more than 200 visitors into their parks to ensure habitat protection for their fragile Oregon silverspot butterfly. At Nestucca, staff and volunteers have been restoring the habitat for years to prepare for the reintroduction of the butterfly there.

The eclipse will then make its way to the Mountain-Prairie region:

The National Elk Refuge in Wyoming is expecting crowds of eclipse enthusiasts on Monday, the NWRS said. The refuge urges visitors to make accommodations before arriving, because camping and overnight parking are not allowed there. For more information, check out the official eclipse site for nearby town of Jackson and Teton County, Wyoming.

The eclipse will next trek through the Midwest:

Spillover crowds from a solar-eclipse-themed festival in southern Illinois called Moonstock could make their way to the nearby Crab Orchard Refuge, the NWRS said. Check out the refuge's website for more information; also, the park is waiving entrance fees on Aug. 21.

Looking for a party in nature? Loess Bluffs National Wildlife Refuge may be your spot. The refuge, located 30 miles (nearly 50 km) northwest of St. Joseph, Missouri, will host a solar eclipse-viewing party featuring information on nighttime wildlife and the solar eclipse.

The last U.S. eclipse-viewing area will be in the Southeast:

The NWRS has a website listing the national wildlife refuges that do allow camping.

REMEMBER not to stare directly at the sun without protective eyewear during the Aug. 21 total solar eclipse. If you don't have certified eclipse viewers, you can also make a pinhole camera viewer that will allow you to see the eclipse without looking at the sun directly.