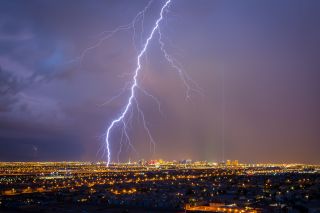 When the world's longest lightning bolt struck over Oklahoma in 2007, it traveled about three-quarters of the length of the state, according to the World Meteorological Organization, which recently announced the electrifying new record.

The lightning bolt traveled 199.5 miles (321 kilometers) on June 20, 2007, the World Meteorological Organization (WMO) said. The organization also confirmed the longest duration for a single flash of lightning: 7.74 seconds, for a flash that occurred over Provence-Alpes-Côte d’Azur, France, on Aug. 30, 2012.

The two announcements mark the first time that lightning has been included in the official WMO World Weather & Climate Extremes Archive, whichdocuments records for heat, cold, wind speed, rainfall and other climate events. [Images of Lightning Unfolding, Frame by Frame]

"Lightning is a major weather hazard that claims many lives each year," WMO Secretary-General Petteri Taalas said in a statement. "Improvements in detecting and monitoring these extreme events will help us improve public safety."

The WMO said the advancement of lightning-sensing technologies made it possible to detect new extremes and allowed the organization to now include lightning measurements in the archive. Randall Cerveny, chief rapporteur of climate and weather extremes for WMO, said experts can now study specific lightning flashes in much greater detail.

Lightning strikes about 25 million times a year in the U.S., annually killing an average of 49 people and injuring hundreds more, according to the National Weather Service. So far this year, lightning has killed 35 people in the U.S., which makes 2016 the deadliest year for lightning since 2007, which had 45 lightning-related fatalities. Improved sensing technologies in recent years have allowed for better warning systems and safety protocols, according to the WMO.

The WMO's full assessment of the record-breaking bolts was published online Sept. 15 in the Bulletin of the American Meteorological Society journal.