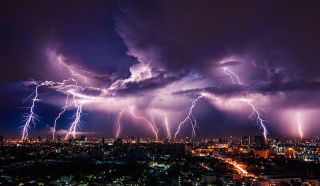 Death by lightning strike may seem rare, but lightning has killed nearly three times as many people this year as tornadoes have, the National Weather Service (NWS) reports.

"This year does seem to be unusually high," said John Jensenius, a lightning safety specialist with the National Weather Service in Gray, Maine. "That's because the totals for the years have been in the 20s for quite a number of years now, since 2009." [Images of Lightning Unfolding, Frame by Frame]

Partly to blame may be lack of awareness about lightning's dangers and, as such, people's riskier behaviors during such storms, Jensenius said.

Coincidentally, 2009 is also the last year that lightning deaths surpassed annual deaths from tornadoes, which led to 21 fatalities that year.

Tornado-related casualties vary widely depending on whether tornadoes hit populated areas. For instance, there were between 36 and 70 tornado deaths between 2012 and 2015, but 553 deaths in 2011, when a tornado struck populated Joplin, Missouri, and a so-called "super-outbreak" of tornados hit the South, Midwest and Northeast, Live Science reported. In fact, 2011 was the deadliest year for tornado deaths in the country, according to NWS records dating back to 1940.

To stay safe during lightning storms, head indoors or to a hard-topped vehicle, Jensenius said. That's because lightning can leave victims dead or with lifelong disabilities, he said.

"When you're struck, you have electricity moving either over or through your body," Jensenius told Live Science. "The electricity typically goes through either the cardiovascular and/or the nervous system."

Lightning can stop a person's heart, sending the victim into cardiac arrest, something that could lead to death if CPR or another treatment isnꞌt administered, Jensenius said.

A lightning strike can also fry the nervous system, which usually sends small electrical impulses throughout the body to control the muscles.

"For people who survive, one of the problems they have is with memory," Jensenius said. "Oftentimes, they have trouble remembering old things, or storing new information and then recalling that information."

Lightning strikes can also cause burns all over the body, Jensenius said.

In addition, a person doesn't have to be directly struck by lightning to feel its stunning impact. It can strike an object near them, the ground they're standing on, or even travel through an electrical wire, including corded phones, the NWS said.