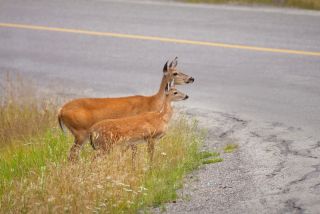 Members of the deer family (Cervidae) are cloven-hoofed ungulates that typically have compact torsos with long, slender legs and small tails — and most males have antlers.

The family is quite large, and includes caribou, elk, moose, muntjacs and wapiti. Cervids are the second most diverse family after bovids (antelopes, bison, buffalo, goats, sheep, etc.). There are about 50 species, but there is some disagreement about cervid classification. According to the University of Michigan's Animal Diversity Web (ADW), no single well-supported phylogenetic and taxonomic history has been established.

Deer species range from very large to very small. The smallest deer is the Southern pudu, according to the ARKive project. It weighs only abbout 20 lbs. (9 kilograms) and gets to be only about 14 inches (36 centimeters) tall when fully grown. [Related: Oh, You Deer: Newborn Mini Fawn Is Seriously Cute]

All deer species have antlers, except for the Chinese water deer. Only males have antlers, except for caribou (reindeer). Both male and female caribou have antlers. Antlers grow from boney supporting structures called pedicels, according to ADW. They are covered in "velvet," which is rich in nerves and blood vessels. When the antlers are fully grown, the velvet dies and the deer will rub it off against a tree or other vegetation.

Cervids are found all over the world, except Australia and Antarctica. While other continents have a wide array of deer, Africa only has one, the Barbary red deer, according to ADW. The Southern pudu is native to Chile and Argentina. The white-tailed deer is common to North and South America.

Deer are found in many different ecosystems. They live in wetlands, deciduous forests, grasslands, rain forests, arid scrublands and mountains. Sometimes, when human civilizations get too close to home, deer will even make themselves comfortable in urban settings.

Deer are very social and travel in groups called herds. The herd is often led by a dominant male, though with some species the herds are segregated by sex. Sometimes the females will have their own herd and the males will have a separate herd. In other cases, a female herd is watched over by a herd of males. Some caribou herds can have as many as 100,000 members, according to ADW.

Most deer are active throughout the day, though their most active times are during sunrise and dusk. They spend their days foraging for food.

Deer are herbivores; they only eat vegetation. For the most part, a deer's diet consists of grass, small shrubs and leaves, though they will forage in trash bins and in gardens if they cannot find the vegetation they need elsewhere.

Deer have one main stomach and three "false stomachs." Like cows, they chew their cud to fully digest their food.

Though not common, some deer are monogamous, such as the European Roe deer. When a deer breeds depends on where it lives. Deer in temperate areas breed during late autumn or early winter. Deer that live in lower latitudes breed from late spring into early summer. Deer that live in tropical climates mate whenever they want, which could be several times per year.

Deer carry their young for a gestation period of 180 to 240 days. For northern and southern white-tailed deer, gestation is around 193 to 205 days, according to Louisiana State University. Usually, the larger the deer, the longer the mother carries it in her womb. Deer usually only have one to three young at a time and these young are called fawns. Some of the large deer babies are also called calves.

Deer range in color from dark to very light brown, according to ADW, and fawns are born with white spots to help camouflage them from predators. Fawns are weaned at two to five months of age. Deer are unable to fully mature unless they reach a certain size, though how big they need to be varies depending on species. Overall, most deer live 11 to 12 years, though many die long before then due to predators or environmental dangers such as collisions with cars.

This is the taxonomy of deer, according to ITIS:

The three subfamilies and their genera and species are:

According to the International Union for Conservation of Nature (IUCN), many deer species are currently endangered. The IUCN's Red List of Threatened Species includes the Calamian deer, Bawean deer, Anhui musk deer, hog deer and the Persian fallow deer. The Père David's deer is extinct in the wild and now can only be found in captive populations, according to the IUCN.

The Chinese water deer is the only species that doesn't shed its antlers, because it doesn't have any. Instead, it has very long canine teeth that it uses to attract mates.

Musk deer are sometimes included in Cervidae but are considered a separate family (Moschidae) with one genus and four species, including the rare and endangered Kashmir musk deer. They are found in central and northeastern Asia, according to ADW. They differ from true deer in that they don't have antlers; instead they have vampire-like fangs. The males grow long fangs that look like they belong on the Halloween spook. They use them to compete for females during mating season. It is sold for $20,455 per pound ($45,000 per kilogram) on the black market, according to the IUCN.