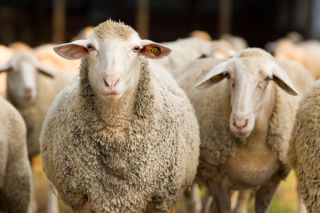 Sheep were among the first animals to be domesticated. There are more than 10,000 breeds of domestic sheep.
(Image: © Budimir Jevtic | Shutterstock )

Sheep are related to antelopes, cattle, muskoxen and goats. All of these mammals are even-toed ungulates — their hooves are cloven, or split into two toes. They are also ruminants — their stomachs have multiple chambers to aid digestion. Most sheep have large, curling horns that are made of keratin — the same stuff as fingernails.

Most people are familiar with sheep as wooly farm animals that say "Baa." But the domestic sheep is just one species of sheep. There are also five (or six, depending on the source) species of wild sheep.

According to Susan Schoenian, a sheep and goat specialist at the University of Maryland's Western Maryland Research & Education Center, it is estimated that there are more than 10,000 distinct breeds of domestic sheep (Ovis aries) worldwide, so they are diverse in size. Selective breeding has produced sheep with or without horns, wool and external ears, according to the University of Michigan's Animal Diversity Web (ADW). They range in length from 4 to 6 feet (120 to 180 cm) and from 2 to 4 feet (65 to 127 cm) at the shoulder.

Some experts, such as the International Union for Conservation of Nature (IUCN), treat the domestic sheep's wild ancestor, the urial, as a separate species (Ovis orientalis). Others, such as the ADW and the Integrated Taxonomic Information System (ITIS), classify them as two subspecies of Ovis aries.

Sheep were among the first animals to be domesticated, and they are raised all over the world. Wild sheep also live throughout the world — in the Middle East, Asia, Central Europe and North America — mostly in mountainous areas. Bighorn sheep live in the Rocky Mountain region of North America. Desert bighorn sheep live in Death Valley, California, as well as Nevada, Texas and northern Mexico. They can live on desert mountains as high as 4,000 feet (1,200 m). Urials can live even higher up. They are found in Asia and the Middle East on grassy terrains with elevations of up to 19,690 feet (6,000 m), according to the ADW.

Sheep are social, but usually only with their own gender. Males have their own herds called bachelor herds. These herds usually contain five to 50 rams at one time. The females live in nursery herds. Nursery herds can have five to 100 members that include adult females and their young.

Male sheep fight for dominance in their group. Some ram each other at speeds up to 20 mph (32 kph), according to National Geographic. Dominance is gained when one male submits. This process can take hours.

Sheep are herbivores, which means their diet does not include meat. They typically eat seeds, grass and plants. Like all ruminants, they have multi-chambered stomachs that are adapted to ferment cellulose before digestion, according to the ADW. To completely digest their food, sheep will regurgitate their food into their mouths, rechew and swallow. This regurgitated food is called cud.

Some sheep don’t need much water. The desert bighorn sheep, for example, gets most of its water from eating plants, according to the Natural History Museum of Los Angeles.

Male sheep fight for the right to mate with the females and the strongest is usually the only one allowed to mate. Mating season, called the rut, happens in the autumn. After mating, female sheep have a gestation period of around five months. They usually give birth to one or two offspring at a time in the spring.

Sheep are part of the Bovidae family, which includes antelopes, cattle and goats. Sheep usually can be identified from their similar looking cousins by their horns. Goats typically have straight horns and sheep have rounded horns. Also, male goats have beards while male sheep do not.

Here is the taxonomy of sheep, according to ITIS:

According to the IUCN's Red List of Threatened Species, most sheep species are listed as Least Concern with no threat of extinction. However, urials (classified here as Ovis orientalis, with eight subspecies), found in the Mediterranean and Middle East, are listed as Vulnerable. Their populations have been declining by at least 30 percent over 24 years, caused by hunting, hybridization and habitat deterioration. Argalis (Ovis ammon), which live across central Asia, are listed as Near Threatened due to significant population decline (but probably at a rate of less than 30 percent over three generations), because of poaching and competition with livestock.

If a sheep rolls over onto its back, it may not be able to get up without assistance, according to the Sheep101 website. A fallen sheep is called a "cast" sheep. They can become distressed and die within a short period of time if they are not rolled back into a normal position. When back on their feet, they may need supported for a few minutes to ensure they are steady. It happens mostly with pregnant ewes and short, stocky sheep with full fleeces.

Most sheep's milk produced worldwide is made into cheese, such as feta, ricotta, pecorino, Romano and Roquefort.

The most famous sheep is probably Dolly, the first mammal to be cloned. She was born in Scotland in 1996, gave birth to six lambs, and died in 2003 after developing a lung infection. She was stuffed and put on display at the Royal Museum of Scotland. (Fun fact: Dolly was named for country singer Dolly Parton.)

Each winter, a sheep’s set of horns gets a growth ring. By counting the rings, scientist can tell the age of a male sheep.

According to The Phrase Finder, the term "black sheep" to refer to a disreputable or disgraced member of a family may have derived from the notion that black fleeces could not be dyed and were therefore less valuable than white fleece. It may also be due to a bad translation of the Bible in 1535.