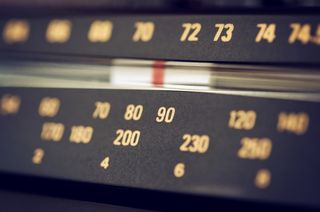 A radio tuner receives radio waves and converts them to mechanical vibrations in the speaker to create sound waves that can be heard.
(Image: © Ensuper | Shutterstock)

Radio waves are a type of electromagnetic radiation best-known for their use in communication technologies, such as television, mobile phones and radios. These devices receive radio waves and convert them to mechanical vibrations in the speaker to create sound waves.

The radio-frequency spectrum is a relatively small part of the electromagnetic (EM) spectrum. The EM spectrum is generally divided into seven regions in order of decreasing wavelength and increasing energy and frequency, according to the University of Rochester. The common designations are radio waves, microwaves, infrared (IR), visible light, ultraviolet (UV), X-rays and gamma-rays.

Radio waves have the longest wavelengths in the EM spectrum, according to NASA, ranging from about 0.04 inches (1 millimeter) to more than 62 miles (100 kilometers). They also have the lowest frequencies, from about 3,000 cycles per second, or 3 kilohertz, up to about 300 billion hertz, or 300 gigahertz.

The radio spectrum is a limited resource and is often compared to farmland. Just as farmers must organize their land to achieve the best harvest regarding quantity and variety, the radio spectrum must be split among users in the most efficient way, according to the British Broadcasting Corp. (BBC). In the U.S., the National Telecommunications and Information Administration within the United States Department of Commerce manages the frequency allocations along the radio spectrum.

Scottish physicist James Clerk Maxwell, who developed a unified theory of electromagnetism in the 1870s, predicted the existence of radio waves, according to the National Library of Scotland. In 1886, Heinrich Hertz, a German physicist, applied Maxwell's theories to the production and reception of radio waves. Hertz used simple homemade tools, including an induction coil and a Leyden jar (an early type of capacitor consisting of a glass jar with foil layers both inside and out) to create electromagnetic waves. Hertz became the first person to transmit and receive controlled radio waves. The unit of frequency of an EM wave — one cycle per second — is called a hertz, in his honor, according to the American Association for the Advancement of Science.

ELF radio waves, the lowest of all radio frequencies, have a long range and are useful in penetrating water and rock for communication with submarines and inside mines and caves. The most powerful natural source of ELF/VLF waves is lightning, according to the Stanford VLF Group. Waves produced by lightning strikes can bounce back and forth between Earth and the ionosphere (the atmosphere layer with a high concentration of ions and free electrons), according to Phys.org. These lightning disturbances can distort important radio signals traveling to satellites.

LF and MF radio bands include marine and aviation radio, as well as commercial AM (amplitude modulation) radio, according to RF Page. AM radio frequency bands fall between 535 kilohertz to 1.7 megahertz, according to How Stuff Works. AM radio has a long range, particularly at night when the ionosphere is better at refracting the waves back to earth, but it is subject to interference that affects the sound quality. When a signal is partially blocked — for example, by a metal-walled building such as a skyscraper — the volume of the sound is reduced accordingly.

HF, VHF and UHF bands include FM radio, broadcast television sound, public service radio, cellphones and GPS (global positioning system). These bands typically use "frequency modulation" (FM) to encode, or impress, an audio or data signal onto the carrier wave. In frequency modulation, the amplitude (maximum extent) of the signal remains constant while the frequency is varied higher or lower at a rate and magnitude corresponding to the audio or data signal.

FM results in better signal quality than AM because environmental factors do not affect the frequency the way they affect amplitude, and the receiver ignores variations in amplitude as long as the signal remains above a minimum threshold. FM radio frequencies fall between 88 megahertz and 108 megahertz, according to How Stuff Works.

Shortwave radio uses frequencies in the HF band, from about 1.7 megahertz to 30 megahertz, according to the National Association of Shortwave Broadcasters (NASB). Within that range, the shortwave spectrum is divided into several segments, some of which are dedicated to regular broadcasting stations, such as the Voice of America, the British Broadcasting Corp. and the Voice of Russia. Throughout the world, there are hundreds of shortwave stations, according to the NASB. Shortwave stations can be heard for thousands of miles because the signals bounce off the ionosphere, and rebound back hundreds or thousands of miles from their point of origin.

SHF and EHF represent the highest frequencies in the radio band and are sometimes considered to be part of the microwave band. Molecules in the air tend to absorb these frequencies, which limits their range and applications. However, their short wavelengths allow signals to be directed in narrow beams by parabolic dish antennas (satellite dish antennas). This allows for short-range high-bandwidth communications to occur between fixed locations.

SHF, which is affected less by the air than EHF, is used for short-range applications such as Wi-Fi, Bluetooth and wireless USB (universal serial bus). SHF can work only in line-of-sight paths as the waves tend to bounce off objects like cars, boats and aircraft, according to the RF Page. And because the waves bounce off objects, SHF can also be used for radar.

Outer space is teeming with sources of radio waves: planets, stars, gas and dust clouds, galaxies, pulsars and even black holes. By studying these, astronomers can learn about the motion and chemical composition of these cosmic sources as well as the processes that cause these emissions.

A radio telescope "sees" the sky very differently than it appears in visible light. Instead of seeing point-like stars, a radio telescope picks up distant pulsars, star-forming regions and supernova remnants. Radio telescopes can also detect quasars, which is short for quasi-stellar radio source. A quasar is an incredibly bright galactic core powered by a supermassive black hole. Quasars radiate energy broadly across the EM spectrum, but the name comes from the fact that the first quasars to be identified emit mostly radio energy. Quasars are highly energetic; some emit 1,000 times as much energy as the entire Milky Way.

Radio astronomers often combine several smaller telescopes, or receiving dishes, into an array in order to make a clearer, or higher-resolution, radio image, according to the University of Vienna. For example, the Very Large Array (VLA) radio telescope in New Mexico consists of 27 antennas arranged in a huge "Y" pattern that's 22 miles (36 kilometers) across.

This article was updated on Feb. 27, 2019 by Live Science contributor Traci Pedersen.